Green Chemistry has recently published an article on the topic of fracking entitled ‘Stimuli-responsive/rheoreversible hydraulic fracturing fluids as a greener alternative to support geothermal and fossil energy production’. This manuscript caused some debate at the Editorial Office in Cambridge due to the controversial nature of fracking and, more specifically, the validity of publishing an article on this topic in Green Chemistry.

After examination by a number of reviewers, the Editorial Office and the Chair of the Editorial Board, Professor Walter Leitner, it was decided that the manuscript was suitable for publication in Green Chemistry. However, given the controversy surrounding this topic we felt the article should be accompanied by an Editorial explaining to the community why we chose to publish and offering an avenue for debate and discussion via the online comments section on this blog.

Professor Leitner has prepared an Editorial that can be viewed below and we invite an open discussion via the comments thread of this blog. We welcome any comments to be made or opinions voiced.

If you would like to contact the Editorial Office directly you can do so by emailing green-rsc@rsc.org.

The subject of ‘fracking’ in Green Chemistry

Chair of the Editorial Board Walter Leitner discusses the subject of ‘fracking’ in Green Chemistry.

On 2nd October 2014, we received a manuscript entitled “Stimuli-Responsive/Rheoreversible Hydraulic Fracturing Fluids as an Alternative to Support Geothermal and Fossil Energy Production” at the Cambridge office. Upon careful examination of its content, we had a very serious discussion at the Editorial Office on whether the paper would fall within the scope of Green Chemistry and should be sent out for review. In the end, we came to the conclusion that we wanted to have the scientific quality examined through the review process and to gather the opinions of those reviewers on whether the work was in keeping with the Principles of Green Chemistry. Three referees suggested acceptance with some revisions, and you can find the final result published in this issue (DOI: 10.1039/C4GC01917B).

It is highly unusual to comment on a single paper and in particular on the reviewing process in an Editorial. Let me try to explain the reasons for this, which are closely related to our initial (and still existing) dilemma. Fracking is a very controversial technique for which a number of potential hazards to the environment are discussed. Most significantly, one may raise the fundamental question of whether an increased exploitation of fossil resources is inherently incompatible with the Principles of Green Chemistry. To be honest, we were unable to find a consensus and a final answer to this question ourselves. Thus, we turned to the classical maxim “in dubio pro reo” (Lat.: when in doubt, for the accused) and decided to evaluate primarily the scientific and technological aspects of the work.

When asked about the relationship between Sustainable Development and Green Chemistry, I have often used the phrase “If Sustainability is your goal, Green Chemistry is the way”. Is unconventional oil and gas recovery a sustainable technology? Certainly not in the long term – but it is and will be for quite some time influencing the basis of our raw material and energetic value chain, having an enormous impact on many aspects of our environment today. “That’s a fact. It’s a thing we can’t deny” (Katie Melua, Nine Million Bicycles). Thus, we cannot close our eyes and ignore the environmental problems that are associated with this technology. One of them is the use of the fracking fluid and all reviewers agreed that the authors of the study have carried out a sound and in depth study and presented data that might help to lower the impact of this particular aspect of the fracking industry. They have addressed this important issue following a molecular design approach in line with green chemistry principles.

Does this mean that we will now all at a sudden encourage the green chemistry community to focus on improvements of existing technologies, even if they are only incremental steps aside into the right direction on otherwise clearly unsustainable paths? Certainly not: we need to continue our efforts to contribute with fundamentally new approaches to a sustainable chemical industry and lay the basis for disruptive green technologies. However, we also recognize that things are not always black or white and there are more than 50 shades of green. In this particular case, we have decided to bring the topic on the table and to shed some light on the chemistry that is involved in fracking from the green chemistry perspective. We would be very much interested to get your feedback on this decision and have opened a discussion forum on the Green Chemistry blog.

I wish you a stimulating reading, not just with this article, but of course also with the many other fascinating examples of scientific creativity and dedicated research efforts in the issues of the Green Chemistry journal. 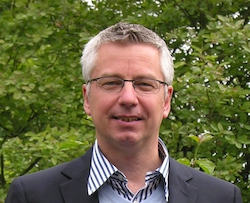 We are pleased to announce that Green Chemistry’s Editorial Board Chairman, Prof. Walter Leitner of RWTH Aachen University, was awarded two distinguished lectureships in China for his contribution to green chemistry science and application.

On 5th March in Beijing, Prof. Leitner delivered the “Molecular Forum Lecture” awarded by the Chinese Academy of Sciences and the Chinese Chemical Society during a visit at the Institute of Chemistry of the Chinese Academy of Science. In addition to this, on 6th March he received  the Nankai Lectureship in Organic Chemistry, awarded by the State Key Laboratory of Elemento-organic Chemistry at the Faculty of Chemistry at Nankai University in Tianjiin. His lectures focused on the challenges and opportunities associated with the use of biomass or carbon dioxide as renewable carbon sources. The presentations highlighted the importance of catalysis research at the interface of molecular and engineering sciences for green and sustainable chemistry.