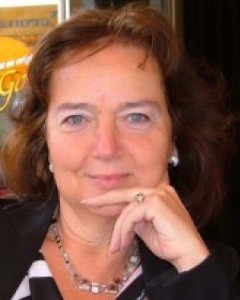 Cinzia Chiappe is a Professor of Organic Chemistry at the University of Pisa, Italy.  Her research interests primarily focus on ionic liquids and their biological and physic chemical properties.  The ultimate goal of her research is to design optimised ionic liquids as solvents and/or catalysts for sustainable chemical reactions.  Cinzia took a few moments to chat to Green Chemistry…

Who or what initially inspired you to become a chemist?

During my studies I was at first attracted by mathematics and biology and I thought I would become a “biologist”. Subsequently, in the last years of high school, my interest moved towards the single mechanisms that determine and govern the life on this planet. I discovered my interest for “molecules” and their interaction ability and so I decided to study chemistry. I therefore became an Organic Chemist.

What has been the motivation behind your recent research?

As an organic chemist, I studied reactivity and reaction mechanisms. At the beginning of this century (1999-2000), I discovered the fascinating world of ionic liquids and immediately I was attracted by these compounds for the copious challenges and potentialities that they offer to a researcher involved in “organic reactivity”. The subsequent step, from ionic liquids to “green chemistry”, was only a short step.

What do you see as the main challenges facing research in this area?

The main challenges are related to the possibility of resolving some strategic problems for this society, i.e. the depletion of our principal source of energy and organic compounds (fossil fuels) as well as the depletion of other important primary materials (some metals and metal salts).

Where do you see the field of green chemistry being in 5 or 10 years time?

I think that green chemistry and the application of its principles in different areas (energy, material sciences, waste disposal and so on) can become a strategic approach (probably, the only one) to overcome the problems characterizing this “small” planet with “many” inhabitants and “few” resources. Of course, small, many and few are strictly related quantities.

If you could not be a scientist, but could be anything else, what would you be?

I don’t know, but probably an “archistar” – a superstar architect.

Take a look at a few of Cinzia’s recent Green Chemistry articles below – all free to access:

Styrene oxidation by hydrogen peroxide in ionic liquids: the role of the solvent on the competition between two Pd-catalyzed processes, oxidation and dimerization, Cinzia Chiappe, Angelo Sanzone and Paul J. Dyson, Green Chem., 2011, 13, 1437-1441*

One Response to “Meet our Authors: Cinzia Chiappe”