An interview with Martyn Poliakoff 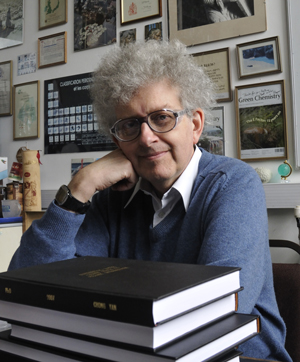 Martyn Poliakoff is a Professor of Chemistry at the University of Nottingham, and the out-going Chair of the Green Chemistry Editorial Board.  As he steps down after leading the Journal for the last six years, Martyn took a few moments to talk to us about how he was inspired to become a chemist and how he sees the field of green chemistry developing in the future…

Who or what initially inspired you to become a chemist?

My father and grandfather were physicists.  From as young as I can remember, it was always assumed that I would become a scientist.  I was lucky to have inspirational physics and chemistry teachers, David Hepburn-Scott and Tony Roberts.  I was not good enough at maths to become a physicist but Tony Roberts really inspired me to focus on chemistry and I am still in contact with him nearly 50 years later.  (Find out more here)

What have you enjoyed most during your time as Chair of the Editorial Board of Green Chemistry?

I have really enjoyed meeting a variety of green chemists and also it has been a pleasure to promote the Journal across the world.

What do you consider to be the most significant development on the Journal during your time as Chair?

I think there have been three important developments during my tenure.  Firstly, the greatly increased Impact Factor; the friendly rivalry with ChemComm has been a great spur to us all. Secondly, the increased rejection rate (including at least one paper of mine!) indicates not only that the Journal has become a more attractive place to publish but also that the standard of Green Chemistry publications is increasing.  Thirdly, the appearance of at least three new journals in this area clearly demonstrates that the foresight of the RSC in recognising the potential of green chemistry.  I am determined that our Journal shall remain the market leader.

What do you see as the biggest challenge facing the field of green chemistry?

The most immediate challenge is to keep industry engaged with green chemistry in the short term because the economic depression has reduced demand for chemicals and the availability of low cost shale gas is making the traditional petrochemical industry increasingly competitive.  In the long term the real challenge facing green chemistry is how to provide the increasing quantities of chemicals that are needed to satisfy the world’s expanding population and particularly to help lift the 1.3 billion poorest people out of the depth of their poverty.

Where do you see the area of green chemistry being in 5 or 10 years time?

I am an optimist; I see green chemistry being even stronger than it is now. I think that organic chemists will be much more engaged than they are now, particularly because of the growing interest in green chemistry and the pharmaceutical area.  I also believe very strongly that green chemistry is an area of chemistry that really appeals to the general public and to young people in particular and this popularity will be reflected more and more in the field itself.

You are renowned for the ‘Periodic Table of videos’ series on YouTube, helping to bring chemistry to a whole new audience.  Which of the videos is your personal favourite and why?

My favourite video is the one about Hassium, because in the first version it began with my saying “I know nothing about Hassium, shall we make something up?” http://www.youtube.com/watch?v=u4GEVxbLego

If you could not be a scientist, but could be anything else, what would you be?

If I weren’t a scientist I think I would have liked to make TV commercials.  In some ways the Periodic Table of Videos (http://www.periodicvideos.com/) has somewhat belatedly satisfied this desire!