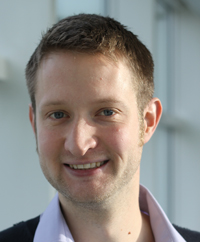 We are delighted to announce our new Advisory Board member – Andy Wain!

Andy Wain is a principal research scientist for the National Physical Laboratory, allowing him to explore his research interests which include heterogeneous catalysis, electrocatalysis, electrochemical imaging and molecular spectroscopy. Whilst at NPL, Andy has been a part of the Electrochemistry Group and is also the lead scientist of a catalysis initiative focusing on supporting industry with state of the art catalysis methods. Andy received an undergraduate Master’s degree in Chemistry from Oxford University in 2003. Continuing his studies at Oxford University, in 2006, he obtained his PhD in electrochemical electron spin resonance spectroscopy. After finishing his studies in Oxford, he spent two years as a postdoctoral research associate at California State University Los Angeles. During this time, his research focused on novel electrochemical approaches to studying bio-molecule modified interfaces. In 2013, Andy became a chartered chemist (CChem) and in 2015 he became a Fellow of the Royal Society of Chemistry (FRSC).  He has published three book chapters and over 40 papers.