It is next to impossible to achieve good mixing with traditional magnetic stir bars in the cylindrical vessels used in microwave synthesis. So scientists in Austria have designed a new stir bar.

Microwave synthesis is becoming more popular thanks to the dramatically reduced reactions times and improved yields it offers. However, as the majority of these reactions involve a small narrow reaction vessel, traditional horizontal stir bars often result in inefficient mixing which can cause temperature gradients to develop and reduce product yields.

Magnetic stirring usually involves a polymer coated AlNiCo or ferrite magnet and relies on the establishment of a liquid flow induced by centrifugal forces. These flow patterns involve a downward liquid motion towards the centre and an upward motion at the vessel wall. However, the strength of the magnet decreases rapidly over a period of months when subjected to the high temperatures of microwave synthesis and the limited size of the vessel restricts the establishment of flow patterns.

‘We noticed that in some instances the agitation of the reaction mixture using a standard magnetic stir bar was very poor. Sometimes the stirrer was not moving at all,’ says Oliver Kappe whose team at the University of Graz used a camera to look at a microwave system before designing the new stir bar.

Choice of magnetic material and shape were thought to be key to the success of the new stir bar. Vertical blade extensions were added to a more robust Sm2Co17 rare earth magnet. This not only extends the life of the stir bar but also significantly enlarges the cross-sectional area of the stirrer. A gap in the centre of the bar guarantees backflow which enforces flow patterns and extended blades mean that even the upper part of the system receives efficient mixing with the incorporation of additional holes and cut-outs inducing additional turbulence.

Comments Off on Stirring microwave synthesis

An international team of scientists has developed a purely chemical approach to interconvert L- and D-amino acids. This method could rival enzymatic routes used in industry, and enable cheaper production of some pharmaceuticals.

While L-amino acids are an inexpensive and renewable source of chiral molecules, used by all cells to synthesise proteins, D-amino acids are scarce in nature and consequently more expensive. Despite their rarity in biological systems, D-amino acids are widely used in the pharmaceutical industry, occurring in many drugs, including antibiotics such as penicillin and anticancer agents such as goserelin.

Currently, D-amino acids are prepared industrially by enzymatically resolving racemic mixtures of amino acids. A readily available source of D-amino acids would obviate the need for resolution, simplifying synthetic routes to many pharmaceuticals.

Vadim Soloshonok, Ikerbasque Research Professor at the University of the Basque Country, Spain, and his colleagues, used inexpensive nickel(II) acetate and a modularly designed chiral ligand derived from α-(phenyl)ethylamine to transform natural amino acids into their unnatural enantiomers. A Ni(II) amino acid Schiff base complex with three stereogenic centres, including a stereogenic nitrogen, was formed under mild and operationally simple reaction conditions. The complex enables the stereocontrolled deprotonation of the α-carbon of amino acids to invert their stereochemistry.

Comments Off on Switching chirality in amino acids

An end to chasing molecules that were never there?

Imagine finally completing a 30 step total synthesis only to discover that the molecule you were aiming for was the wrong one. The consequences of structural misassignment of complex organic molecules can be costly and time consuming, not to mention frustrating. Now, a new NMR method aims to highlight errors in proposed structures at a much earlier stage, preventing such scenarios.

NMR spectroscopy is a standard tool for elucidating the structure of organic molecules. This may be a straightforward job when confirming the identity of small molecules. However, in the case of complex molecules, the task becomes much more difficult and errors can result in the wrong structure being proposed.

Ariel Sarotti from the Rosario National University, Argentina, has developed a new, computationally inexpensive method combining calculated and experimental 13C NMR data to flag up incorrect structures. This rapid and simple process can determine if a candidate structure is incorrect, using trained artificial neural networks (ANNs) to find patterns in both the calculated and experimental data to do the decision making. A set of 200 molecules with known correct and incorrect NMR assignments was used to create and train the system. The subsequent testing phase correctly identified the incorrect structures of a set of 26 natural products. While some knowledge of computational chemistry is required, Sarotti’s development of an Excel spreadsheet tool will allow chemists to use the method without being experts in ANNs, making it much more accessible.

Comments Off on An end to chasing molecules that were never there?

Avian influenza is an RNA virus, with subtypes classified by hemagglutanin and neuraminidase (NA) viral surface membrane glycoproteins. There are 9 NA serotypes of influenza A circulating within the avian population (N1-N9). At present, there are two commercially available NA inhibitors, oseltamivir (Tamiflu) and zanamivir (Relenza) and the threat of drug-resistant viruses is driving the development of new NA inhibitors.

Comments Off on New neuraminidase inhibitors to combat bird flu

Synthetic indirubin derivatives can selectively inhibit cyclin-dependent kinases, stalling cancer growth and proliferation.
Peter Langer and co-workers hypothesised that selenoindirubins could have similar anti-proliferative effects. Selenoindirubins are scarcely reported in the literature, with only three examples known. This HOT article details an optimized synthesis for a series of selenoindirubins, alongside the first report of spectroscopic data for this class of compounds. A glycosyl moiety increased the pharmacological activity of indirubin derivatives and was incorporated into the selenoindirubin series to improve their solubility in DMSO and water. Members of this series had an anti-proliferative effect in lung cancer cells. Apoptosis was enhanced by combination treatment with the death ligand TRAIL, suggesting that selenoindirubins may have potential applications as anti-tumour agents.

In this HOT article Bräse and co-workers report the synthesis of eight new rhodamine fluorophores with fluorous ‘ponytails’, dubbed rhodamine F dyes. Rhodamine derivatives are widely used as fluorescent labels for biomolecules and characteristically have high absorption coefficients and high absorption and emission maxima in the visible region combined with high chemical and photostability.

The ‘ponytails’ are fluorous alkyl residues that are deliberately not cleaved during synthesis. They facilitate fluorous solid-phase extraction, utilising the strong, specific nature of fluorine-fluorine interactions. During this purification process a fluorous solid phase is used to bind fluorous molecules and separate them from non-fluorous compounds.

The fluorine content of the rhodamine F dyes is below 50% of the total molecular weight, preserving solubility in organic solvents. Conjugation with a peptide mediates cellular uptake may have potential applications in live cell imaging; clear, bright images were obtained in human cervix carcinoma cells incubated with rhodamine F dyes at concentrations as low as 1 µM.

Comments Off on HOT – Dyes with fluorinated ponytails

The RSC is delighted to announce a fantastic bursary opportunity for PhD students/post docs to attend the Advanced School Bioorganic Chemistry taking place in Araraquara, Brazil, 30 June – 05 July 2013. The school includes talks and discussion sessions from highly qualified scientists (including Professor Steven V. Ley from the University of Cambridge) and leaders in the field covering bioorganic chemistry, involving aspects of natural products, medicinal chemistry, synthesis and spectroscopic methods.  The full programme can be viewed here: http://www.bioorgchemespca.iq.unesp.br/nodes/view/program

FAPESP (Sao Paulo Research Foundation) have invited the RSC to select 2 UK students to participate in the meeting. The bursary will cover international and domestic transportation, hotel accommodation, meals, registration fee and welcome reception. To apply please complete the form which is available download here and at the end of this post. Return to science@rsc.org by 19 April 2013 at 4pm.

In this HOT article, Dave Smith, Sabrina Pricl and co-workers report the synthesis of 4 different RGD-peptide derivatives, which spontaneously self-assemble into nanoscale architectures. They used multiscale modelling to understand the self-assembly of these ligands and they demonstrated that by modifying the building blocks through organic synthesis on the molecular scale, they could control the morphology of the resulting self-assembled nanostructures. The multivalent binding of the assemblies to integrin proteins was shown to be highly dependent on the morphology of the assemblies. The paper elegantly showcases the importance of nanoscale morphology on binding events and highlights the advantages of employing a self-assembly approach. 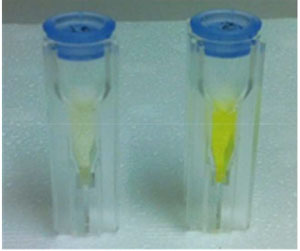 UK researchers have developed a faster way to detect Staphylococcus aureus bacteria using a fluorescent probe. The method holds promise as the basis for a new rapid diagnosis kit to identify infections in hospital patients.

S. aureus infections, including both methicillin-resistant and methicillin-susceptible strains (named MRSA and MSSA, respectively), persist in hospital wards worldwide. In the UK, controlling outbreaks is a constant challenge for the NHS. Fast diagnosis is as important as thorough treatment in the early stages of an outbreak. However, current screening methods are slow and costly.

‘The problem with existing techniques is that they take time,’ explains Adam Le Gresley, of Kingston University, who lead the team that developed the probe. ‘You either have to amplify the bacteria in culture, or amplify the DNA with PCR. It’s not something that can be done at the point of care.’

To address this, Le Gresley and his colleagues have developed a test that is sensitive to very low levels of bacteria, eliminating the need for culture. The method utilises staphylothrombin, an enzyme complex unique to S. aureus. It employs a test solution comprising a tripeptide chain, which mimicks staphylothrombin’s natural target, that is bound to rhodamine, a fluorescent dye. When S. aureus is present, it releases staphylothrombin which frees the rhodamine from the tripeptide by cleaving an amide bond. This results in a strong colouration in the solution.

Comments Off on New diagnostic test lights up bacteria