In this month’s Editor’s Collection, Associate Editor Santanu Mukherjee highlighted ‘Recent advances in the direct O-arylation of carbohydrates’ by Dimakos & Taylor as one of his personal favourite recent Organic & Biomolecular Chemistry articles. Here, we catch up with Brett to find out a little bit more about his research. 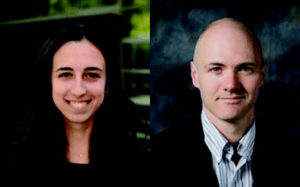 Victoria Dimakos was born in Toronto. In 2015, she received her undergraduate degree in Chemistry and Art History at the University of Toronto. As an undergraduate, she was introduced to carbohydrate chemistry in the laboratories of Profs Mark Nitz and Mark S. Taylor. She began her graduate studies in 2015 at the University of Toronto in the Taylor group, where her research has focused on the development of site-selective functionalizations of carbohydrate derivatives using organoboron reagents. She has completed her PhD and is now conducting postdoctoral research with Prof. Stephen Newman at the University of Ottawa.

Mark S. Taylor was born in Oxford, England and grew up in Toronto. He received his B.Sc. in chemistry in 2000 from the University of Toronto. After graduate studies at Harvard University under the supervision of Prof. Eric Jacobsen, he took up a postdoctoral fellowship at MIT, working in the research group of Prof. Tim Swager. In 2007, he returned to the Department of Chemistry at the University of Toronto, where he is Professor and Canada Research Chair in Molecular Recognition and Catalysis.

What inspired you to write this Review article?

What primary research are you carrying out in the area?

My group is broadly interested in developing site-selective transformations of carbohydrates, with a focus on catalytic processes. We have used organoboron catalysts and reagents for selective functionalizations of OH groups in sugars, and have recently expanded this program to include selective formation of carbon-centred radicals by hydrogen atom abstraction.

What are your thoughts on the future of this research field?

One dimension of the work described in this review article involves developing new approaches for the preparation of O-aryl glycosides, compounds with established applications in medicinal chemistry and biochemistry. These new approaches may offer complementary advantages to the more established methods. On the other hand, the products of O-arylation at non-anomeric OH groups have not been explored extensively. Considering that aryl groups are important pharmacophores, the ability to append them to carbohydrates in a direct and efficient way may create new opportunities in medicinal chemistry and other fields. Several of the discoveries highlighted in the Review have taken place at the nexus of the carbohydrate chemistry and transition metal catalysis fields, and it is likely that more exciting discoveries will be reported along this line in the future.

Read the full article: Recent advances in the direct O-arylation of carbohydrates