In this month’s Editor’s Collection, Associate Editor Elizabeth Krenske highlighted ‘Photochemical [2+2] Cycloaddition Reaction of Carbonyl Compounds with Danishefsky Diene’ by Manabu Abe et al. as one of her personal favourite recent Organic & Biomolecular Chemistry articles. Here, we catch up with the authors to find out a little bit more about their research 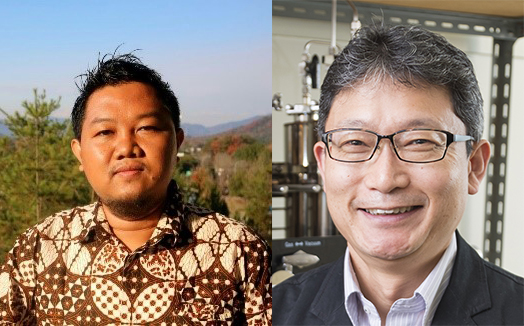 From left to right: Dian Agung Pangaribowo and Manabu Abe

Manabu Abe was born in Sakai City, Osaka Prefecture, Japan. He received his Ph.D. from the Kyoto Institute of Technology (KIT), Professor Akira Oku, in 1995, studying the oxidative ring-opening reaction of cyclopropanone acetals and its application to organic synthesis. After 12 years in Osaka University as an assistant professor and associate professor, he moved to Hiroshima and became a full professor in Organic Chemistry at the Department of Chemistry, Graduate School of Science, Hiroshima University (HIRODAI) in 2007. His research focuses on reactive intermediates chemistry, especially on diradicals, organic photochemistry and unusual molecules.

Dian Agung Pangaribowo received his Master’s degree in 2013 from Airlangga University, Surabaya, Indonesia. He is currently a doctoral program student at the department of chemistry, graduate school of science, Hiroshima University, under the supervision of professor Manabu Abe. His current research focuses on photochemical [2+2] cycloaddition reaction of Danishefsky-Kitahara diene with a carbonyl compound.

Electronically excited-state molecules, which are generated by photolysis and have different electronic characteristics from their ground-state molecules, possess strong potentials to produce unexpected reactions and products that are not expected in the thermolysis of the same combination of compounds. In this study, as a case study, we are very much interested in exploring regio-, stereo-, and chemo-selectivities in the photolysis of Danishefsky-Kitahara diene with carbonyl compounds, whose selectivities should be different from those in the thermolysis.

What do you personally feel is the most interesting outcome of your study?

Two important findings emerged in the photolysis of the trans-configured Danishefsky-Kitahara diene with benzophenone; (1) a clean isomerization from the trans-form to the cis-form of the diene, which has not been achieved so far in thermal reactions. (2) Potentially bioactive compounds, oxetanes, are formed in high yields. The chemo-selectivity of the photochemical reaction is totally different from the Lewis acid-promoted thermal reaction.

What are you going to be working on next?