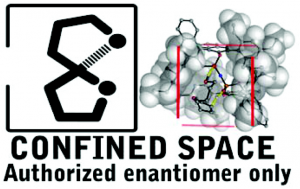 Computational chemistry is a powerful tool for understanding real-world chemical problems. The gap between experiment and computational models is growing ever smaller. Calculated results for isolated molecules are becoming more relevant and reliable calculations for larger and larger molecular systems are becoming more accessible.

A computational study of enantioselective spiroacetalization catalyzed by phosphoric acids carried out by researchers at the Universidad de Salamanca and Oxford University effectively demonstrates the ability of advanced computational methods to elucidate key and often subtle factors that lead to different reaction outcomes.

The origin of greater enantioselectivity for the imidodiphosphoric acid (Figure, cat-II) over the binol phorophoric acid (Figure, cat-I) was determined through exhaustive analysis of transition state conformers using the QM/MM method. Ultimately,  it was determined that the source of chiral discrimination in catalyst II comes from a unique, bifunctional hydrogen bonding interaction between the catalyst and substrate. This confining interaction ends up limiting the accessible area to the imidodiphosphoric oxygen, resulting in an enantioselective outcome.

The significance of this work lies in the utility of theoretical models in explaining important empirical results. The ability to dissect a mechanism and identify the influential factors that determine a selective reaction outcome could not have been so easily accomplished without the use of computational analysis and will no doubt aid in the design of future organocatalysts for small, non-sterically demanding molecules.