The 7th International Conference on Nanoscience and Nanotechnology, China 2017 (ChinaNANO 2017) will be held in Beijing on 29 – 31 August, bringing together scientists from across the globe.

We are proud to announce the Nanoscale Horizons Symposium at ChinaNANO 2017, with talks from distinguished board members for Nanoscale and other Royal Society of Chemistry journals to showcase exceptionally high quality and exciting work across a broad scope of nanoscience and nanotechnology.

Notably, Professor Chunli Bai, President of the Chinese Academy of Sciences and Editor-in-Chief of Nanoscale, will also attend this symposium and deliver a welcome speech. 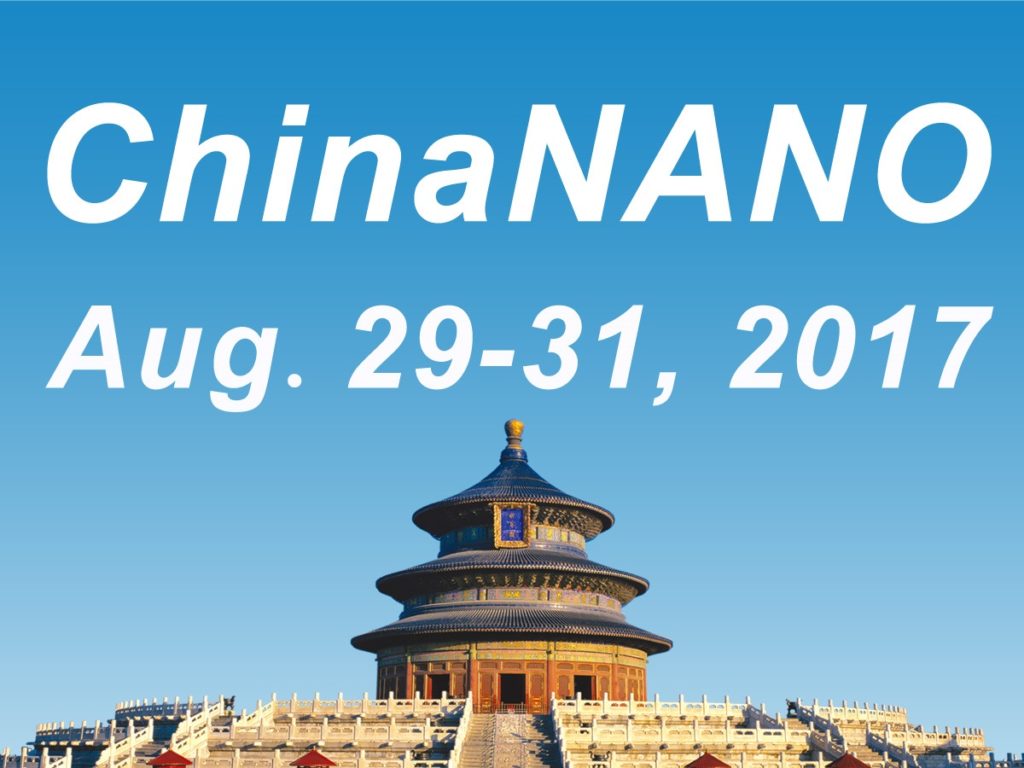 ChinaNANO 2017 is intended to stimulate discussions on the forefront of research in nanoscience and nanotechnology. The conference will focus on the following topics:

For more information about this exciting conference, please visit their web page.

Inspired by the hierarchical structures and microscopic surface textures of the dry-climate plant Callitris endlicheri, the graphene structures use capillary effects to transport and store water in a similar way, but at much smaller length scales. Typically, tuneable surfaces such as these, require chemical surface modifications; but this Nanoscale Horizons article outlines a new method involving plasma-assisted growth of graphene ‘nano-flaps’ covalently bonded to micro-sized vertical grapheme graphene wells (termed ‘Sub-μGW’). The surfaces showed better water purification of metal nanoparticles from water and remarkable electrochemical performance in supercapacitors (2.5x higher specific capacitance of Sub-μGW electrodes). These excellent properties are attributed to enhanced solid-liquid interfacing leading to a super hydrophilic surface by reduction of air bubbles, and better device performance.

In the future, this biomimetic approach could be used to control the wettability of a range of porous microstructured surfaces, and could lead to further breakthroughs in important areas such as energy storage and conversion, water purification, and biomedical devices.

Fig. 1. SEM images of grapheme nanostructures showing the decreasing nanotexture densities from (d) to (f). (g) Schematic of the capillarity driven modification process for the adjustment of the nanotexture density in Sub-mGWs.

Single cell manipulation can provide insight into cell mechanics and adhesion, and has a crucial role in in vitro fertilization (IVF). Bartusz Grzybowski at Ulsan National Institute of Science and Technology in South Korea and his team’s new technique for this doesn’t need cells to be magnetically tagged beforehand. It also avoids the risks of heat- or stress-induced cell damage that can occur with other methods.

Grzybowski et al.’s method relies on an iron oxide nanoparticle medium in which cells are suspended. Applying an electromagnet to the magnetic medium through a micropen creates field gradients, which direct the cell to move in a certain direction. By varying how the micropen “tweezers” are positioned, cell movement can be manipulated in both 2 and 3 dimensions.

As well as controlling a single cell, the micropen can be used to pick up several cells together and guide them into regularly shaped clusters. Although it’s a long way off, this could one day be used to make IVF processes more efficient, reducing the number of potential embryos that need to be discarded. It could also be extended to manipulating bacteria and other single-celled organisms to conduct detailed studies on their behaviour.

A novel siRNA delivery system that could pave the way for genetic treatment of cancer, neurogenerative diseases or even HIV has been described in a new HOT article published in Nanoscale Horizons.

Over the last few years siRNA (small interfering RNA) has gained increasing attention as a new way to treat genetic diseases or viruses by silencing the genes responsible – the RNA fragments prevent the proteins that cause the illness from ever being expressed in the first place, making it the ultimate preventative therapy. However, current efforts have been hampered by the difficulty of delivering the delicate siRNA to the brain in one piece, before it’s degraded or attacked by the body’s immune defences.

This new system, developed by Michael Sailor’s team at the University of California, San Diego, uses porous silica nanoparticles as a protective carrier of the siRNA – the siRNA is hidden inside the pores of the nanoparticles where it’s protected from the body’s immune responses and harsh cell environments. A graphene oxide shell around the nanoparticles ensures that the siRNA stays safely inside them until they reach the brain. They will then release the still-intact siRNA,  where it prevents sections of DNA from producing damaging proteins.  The nanoparticles, which are fluorescent and easily tracked on their journey through the body, can be targeted to specific brain cells by attaching certain peptides; when the researchers attached rabies virus glycoprotein to the nanoparticles,  their uptake by neuronal cells doubled. The system successfully silenced genes in cell cultures – even in the presence of RNA-degrading nucleases – and, promisingly, proved capable of delivering siRNA to the brains of live mice who had suffered brain injuries. Significantly more of the siRNA-carrying nanoparticles accumulated around damaged tissues than the healthy brain tissues, and released large quantities of siRNA once they got there.

Although it’s early days, the system shows great promise for genetic therapies using siRNA. By using siRNAs to silence the genes responsible for out-of-control replication of cells, it could one day be used in the prevention of cancer – and siRNAs targeted to viral proteins could even be used to successfully treat HIV.

Nanoscale Horizons is happy to announce the Nanoscale Horizons award was given to Dr Seiji Yamazoe for the best presentation at the 14th Annual Meeting of The Society of Nano Science and Technology, June 14th – 16th 2016 in Fukuoka, Japan.

His presentation was entitled “Effect of structural factors on bond stiffness of ligand-protected metal clusters”. Dr. Seiji Yamazoe is currently an assistant professor at University Tokyo. 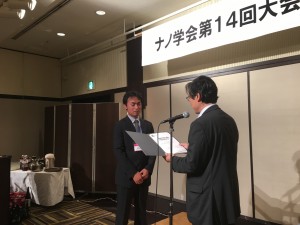 Professor Junichi Sone, the president of the Society of Nano Science and Technology presented the award to Dr Seiji Yamazoe. 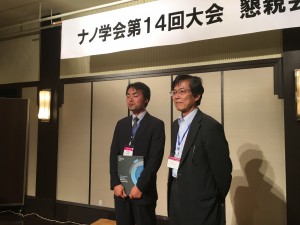 Professor Junichi Sone, the president of the Society of Nano Science and Technology presented the award to Dr Seiji Yamazoe.

Look out for our Nanoscale Horizons flyers in the delegate bags at International Conference On Nanomedicine And Nanobiotechnology – ICONAN 2016. Nanoscale Horizons will also be providing a poster prize including a certificate and free online subscription to one of Materials Horizons, Nanoscale, Journals of Materials Chemistry A, B or C (worth in excess of £1500).

The International Conference On Nanomedicine And Nanobiotechnology will be held in Paris on September 28th – 30th. It is an annual event that hosts high-profile plenary speakers, world class researchers, oral and poster presentations, workshops, sponsor exhibits and afterworks. It is a great opportunity to share your research findings with wide audience, promote knowledge exchange, and network.

Nanoscale Horizons is thrilled to be supporting the 2nd Zing Nanocrystals Conference with a student poster prize including a certificate and free online subscription to one of Materials Horizons, Nanoscale, Journals of Materials Chemistry A, B or C (worth in excess of £1500).

The 2nd Nanocrystals Zing conference will be held in Dublin, Ireland, between 2nd — 5th August 2016. The conference seeks to bring together researchers interested in the synthesis, characterization and manipulation of nanocrystals, as well as nanocrystal-based devices.

The conference topics include, but are not limited to:

Nanoscale Horizons are delighted to announce its support of Nanotech France 2016 in the form of two poster prizes including a certificate, copy of the first ever issue of Nanoscale Horizons and also a free online subscription to one of Materials Horizons, Nanoscale, Journals of Materials Chemistry A, B or C (worth in excess of £1500). You will also be able to find our flyers in your delegate bags.

Nanotech France 2016 brings together leading scientists, researchers, engineers, practitioners, technology developers and policy makers in nanotechnology to exchange information on their latest research progress and innovation. The conference covers all frontier topics in nanotechnology. The conference includes plenary lectures, Keynote lectures and invited talks by eminent personalities from around the world in addition to contributed papers both oral and poster presentations.