Uncovering the effect of nonreactive clays on natural groundwater attenuation

Nitroaromatic compounds (NACs) are widely employed in the explosives (e.g. trinitrotoluene, TNT) and pesticides industries and as intermediates in chemical synthesis. They can show strong toxic and carcinogenic effects resulting from the tendency of the nitro group to participate in radical formation reactions. Following their extensive use NACs have become prevalent contaminants in groundwater, situation which poses an obvious risk towards population exposure through drinking water supplies.

Natural attenuation of groundwater involves the removal of contaminants by natively occurring microorganisms or by abiotic transformations, situation beneficial in theory, with human intervention required only to monitor the process. The potential for natural attenuation in the case of NAC contamination is under analysis.

One process which contributes towards the removal of NACs involves their reaction with Fe(II) dissolved in groundwater in the presence of iron oxide nanoparticles such as goethite. The system functions by allowing adsorption of both Fe (II) and the NAC onto the nanoparticle surface before reaction occurs.

Under natural conditions the occurrence of nonreactive clays together with the iron oxide deposits is widespread. The effect such clays have remains unexplored despite extensive research having been carried out into the process of natural groundwater attenuation.

Arnold and Penn have performed a study to elucidate the effect that kaolinite (a nonreactive clay) has on the reduction of 4-chloronitrobenzene (a model NAC contaminant) by the widespread Fe(II)/goethite system. Measuring the rate of reaction in the presence and absence of kaolinite revealed the detrimental effect the clay component had on the decontamination process.

A detailed study was carried out by employing specialised cryo-microscopy analysis of the particles present within the reaction mixtures. Normal microscopy techniques were deemed unsuitable as the process of sample preparation required their drying. Freezing the liquid samples instead allowed for the true nature of the solution to be analysed without alteration. 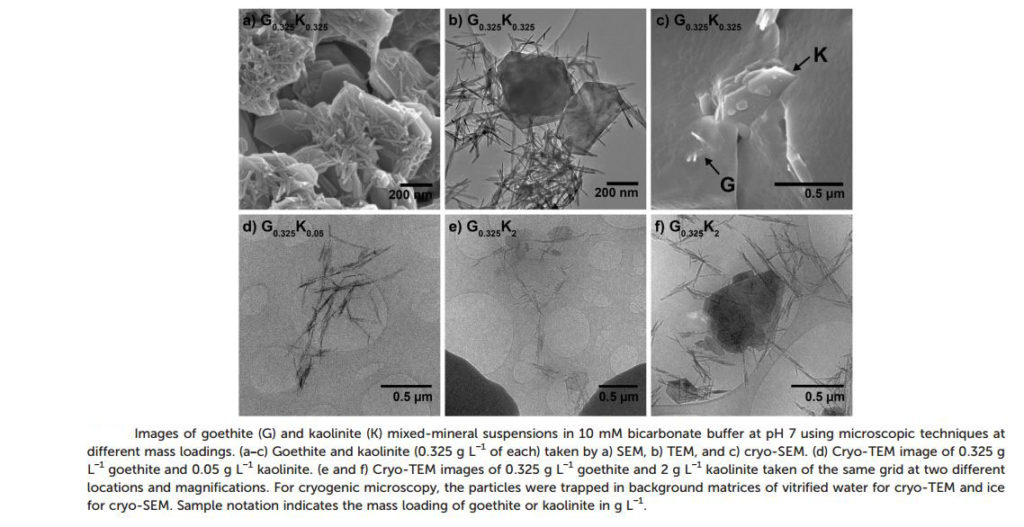 Deciding whether decontamination can be carried out through an active or passive method relies on a detailed understanding of the processes occurring on site. The current study adds to the body of knowledge necessary for such an analysis and draws attention to the role of some of the major components found on sites for which natural attenuation is under consideration.

Full details about the study can be accessed free of charge for a limited time:

About the webwriter
Dan Mercea is a PhD student in the Fuchter group at Imperial College London. He is working on developing enantioselective FLP catalysis.
—————-