Scientists in the US and South Korea have used molecular simulations to study over 130,000 hypothetical MOFs to expand their knowledge of potential CO2 capture materials. The team calculated the adsorption properties, which allowed them to define structure-property relationships for structural characteristics (pore size, surface area, pore volume), and chemical characteristics (i.e. functional groups), building up a roadmap to act as a shortcut to future porous material design.

Many researchers have been looking at different types of compounds for CO2 capture and metal-organic frameworks (MOFs) seem to be the most promising. Until now, there have been no clear correlations between material properties (pore size, surface area and pore volume).

Currently, polymer and organic solar cells are made using time-consuming and often toxic methods, and use expensive elements in low abundance such as indium-tin-oxide (ITO) and silver electrodes.

Now, scientists in Denmark have developed a solar cell stack that comprises four printed and coated layers using fully automated processing, which is free from ITO and silver.

They have moved the field from rigid, ITO single cells, made using slow vacuum and spin-coating methods, to build flexible modular solar cells, free from ITO, made by full roll-to-roll processing, which is fully scalable.

Read the EES ‘hot article’ hot off the press:

Researchers in the US have used cyanobacteria (blue-green algae) to covert CO2 into valuable organic chemicals.

Good conversion rates of 65% were obtained and the authors say that the system could be developed to harvest a range of organic compounds from phototrophs (organisms that carry out photon capture to produce energy, like algae). They add that the tool will facilitate future research on photosynthetic production of biofuels and chemicals and new insights into mechanisms for using cyanobacteria for carbon re-distribution.

A method to determine conduction band energy of nanostructured semiconductors

Nanostructured semiconductors such as TiO2 are important for dye-sensitised solar cells and photocatalysis. Measuring the conduction and valence band energy of semiconductors is one of the most important physical parameters. However, these are currently problematic to measure; there is no reliable method. The new method is quick, makes a minimal number of assumptions and is remarkably versatile. The team says that they expect it could be used with a variety of porous semiconductor materials. 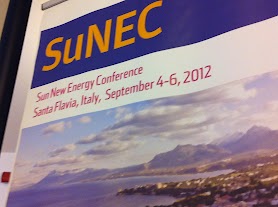 SuNEC 2012 took place in Sicily, Italy from 4-6 September and was deemed a great meeting by all involved.

Comments Off on SuNEC 2012 Conference: a great success

Scientists in the US, Mexico and China have developed semi-transparent organic photovoltaic (OPV) cells with high performance, tuneable transparency and excellent colour perception and rendering properties.

The performance of semi-transparent OPV devices is much lower than their opaque counterparts, and much needs to be done to study and optimise their properties. The team has made semi-transparent OPVs using a low bandgap polymer. By tuning the thickness of the reflective metal electrode, they achieve power conversion efficiencies of 4.25–7.56% and transparency from 2–36%.

They say that their cells have significantly improved performance compared to other semi-transparent OPVs with similar transparencies. The colour rendering indices (CRIs)* of their devices are close to 100, the best values ever reported. (* CRI = quantitative measure of the ability of a light source to reproduce the colours of various objects faithfully in comparison with an ideal or natural light source.)

Polymer solar cells are of interest due to their roll-to-roll fabrication and associated low cost. Semi-transparent OPV devices are a promising candidate for power-generating window applications, as they can be integrated with conventional elements in buildings and vehicles.

Desalination is currently a very topical area of research; with the world’s ever increasing population and demand for fresh drinking water. As a result, research in this area is moving fast, with new technologies being developed all the time.

EES has just published papers from two separate groups on the latest developments in capacitive deonization/desalination. Capacitive desalination (CD) is a promising new desalination technique, relative to reverse osmosis (RO), as it can operate at low (sub-osmotic) pressures and has the potential to use less energy when desalinating brackish water (from estuaries and coastal marsland).

The first paper demonstrates an alternative architecture to traditional CD cells, where the feed flows directly through the electrodes along the direction of the primary electric field (flow-through electrode (FTE) capacitive desalination). This novel set-up has resulted in a significant reduction in desalination time and improved salt concentration reductions; with a mean sorption rate of nearly 1 mg NaCl per g aerogel per min, that’s up to 10 times higher than that demonstrated by the typical CD cell:

The second paper discusses membrane capacitive deionization (MCDI), which is based on applying a cell voltage between two oppositely placed porous electrodes, with a spacer channel that transports the water to be desalinated. Current MCDI devices operate at a constant cell voltage, resulting in an effluent stream of desalinated water of which the salt concentration varies with time. In this paper, van der Wal and colleagues propose a different operational mode for MCDI, whereby desalination is driven by a constant electrical current, which leads to a constant salt concentration in the desalinated stream over long periods of time. This is shown to significantly reduce energy consumption, which would be essential for the economic viability of membrane-based desalination techniques:

You can read more about desalination in the recent Chemistry World article: Keeping the tap on and other related articles.

Comments Off on New research on capacitive desalination

A twist on dye-sensitised solar cells

In DSSC devices, dye aggregation on the TiO2 electrode is one of the most serious problems, which leads to a reduced device performance. Conventional solutions involve cumbersome optimisation processes and increased production costs, so a simple solution for the problem is required.

Scientists in Japan and China have reported an aggregation-free branch-type organic dye with a twisting pi-conjugate architecture. They compare it with an analogue dye possessing a planar molecular structure. The influences of deoxycholic acid co-adsorption are investigated, and it is found that the twisting dye has excellent potential as an aggregation-free dye.

Read the ‘HOT’ EES article hot off the press:

Comments Off on A twist on dye-sensitised solar cells

Scientists in China and the US have demonstrated a thermoelectric material with excellent thermal and chemical stability up to high temperatures; it’s a promising material for converting wasted heat into electricity, they say.

Scientists in the US have investigated the influence of a polymer’s crystallinity [P(VDF-TrFE)] on its function in ferroelectric photovoltaic devices by comparing crystalline and amorphous phases.

The team’s results showed that the highly crystalline polymer film is needed for enhanced power conversion efficiency, because only crystalline P(VDF-TrFE) is ferroelectric.

The method, they say, could be applied to many other devices, such as organic solar cells with low bandgap polymers, tandem solar cells, organic light emitting diodes, organic field effect transistors and organic bistable memories.

Comments Off on Crystallinity is essential for organic photovoltaic devices