Do you know an early-career researcher who deserves recognition for their contribution to the biomaterials field?

Biomaterials Science is pleased to announce that nominations are now being accepted for its 2019 Lectureship award. This annual award was established in 2014 to honour an early-stage career scientist who has made a significant contribution to the biomaterials field.

The recipient of the award will be asked to present a lecture at the 2019 European Society for Biomaterials Annual Meeting, where they will also be presented with the award. The Biomaterials Science Editorial Office will provide financial support to the recipient for travel and accommodation costs. 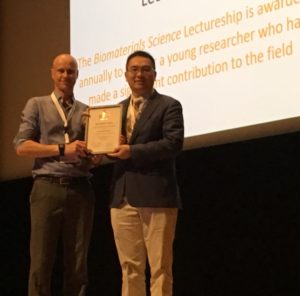 Although the Biomaterials Science Lectureship doesn’t explicitly reward support of or contributions to the journal, candidates with no history of either publishing in or refereeing for the journal would typically not be considered.

Nominations should be submitted no later than 19th December 2018.