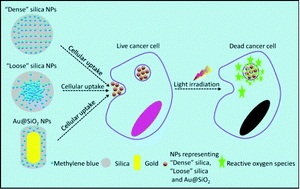 Researchers have demonstrated that controlling nanoparticle shape and packing can impact how cancer therapeutics interact with cells.

Photodynamic therapy is an innovative emerging therapy for cancer.  This therapeutic modality consists of introducing light-activated molecules known as ‘photosensitizers’ into cancer cells.  When activated with light, these photosensitizers are able to produce toxic molecules within the cells (also known as reactive oxygen species or ROS) that can eventually cause cancer cell death.  Photosensitizers are often introduced into the cells using nanoparticle carriers. In order for effective cell death to occur, ROS must be formed within the nanoparticles and then diffuse out of the nanoparticles into the cells.

In this article, Chu et al. have designed silica-based nanocarriers that can control how photosensitizers interact with cells. They previously found that when photosensitizer-loaded nanoparticles were packed more densely, the amount of ROS that was released decreased.  In contrast, more loosely packed nanoparticles allowed for greater release of ROS into cells. In this study, the researchers designed a third type of nanoparticle consisting of a gold nanorod coated with dense silica. They found that this third type of nanoparticle released photosensitizers much more efficiently than the either densely packed or loosely packed silica-only particles. They also discovered that the nanorod-based particles produced a different distribution of ROS as compared to the loose or dense silica-only particles. When cells were treated with these nanoparticles, loosely-packed silica particles and the nanorod-based particles demonstrated dramatic decreases in cell-viability due to the action of the photosensitizers. Further, while the silica-based loose and dense particles caused cells to die via a programmed cell death (apoptotic) route, the nanorod-based particles caused cell death via cell injury resulting in premature cell death (necrosis).

These experiments suggest that controlling the composition and shape of the nanoparticles that carry photosensitizers to cancer cells can alter both the number of cancer cells killed as well as the mechanism by which the cells die. This work has implications for future photodynamic therapeutic strategies.

Debanti Sengupta recently completed her PhD in Chemistry from Stanford University.  She is currently a Siebel postdoctoral scholar at the University of California, Berkeley.

One Response to “Cancer therapy with nanoparticles”