The Pan Africa Chemistry Network Congress 2017: Sustainable Agriculture; How the Chemical Sciences Can Contribute to Food Security for a Growing Population (PACN) was held from 7th – 9th November in Accra, Ghana. It is the RSC’s flagship annual event for the African chemical sciences community and consists of lectures, exhibitions, posters and networking.

PACN offers researchers and policy-makers a chance to meetup and discuss current research, challenges, new developments and crucial issues on the topic of sustainable agriculture. The Congress was designed to reflect the diversity of science and research in a bid to help solve challenges of food security and progress towards sustainable agriculture, with a focus on the chemical sciences. All participants  had the opportunity to engage with other scientists, hear about cutting edge research and policy, and exchange ideas.

Analytical Methods proudly sponsored the Aglient Prize. We would like to congratulate the winner: Nkechinyere Isienyi, Forestry research Institute of Nigeria. Her entry was entitled “Impact of heavy metal on soil near Lapite dumpsite in Ibadan, Nigeria”. One of the undoubted highlights of the congress was when Nkechinyere Isienyi was awarded her poster prize, as it was clear to everyone how much the award meant to her. With the quality of submission so high, thankfully there were also several other poster prizes awarded during the congress. 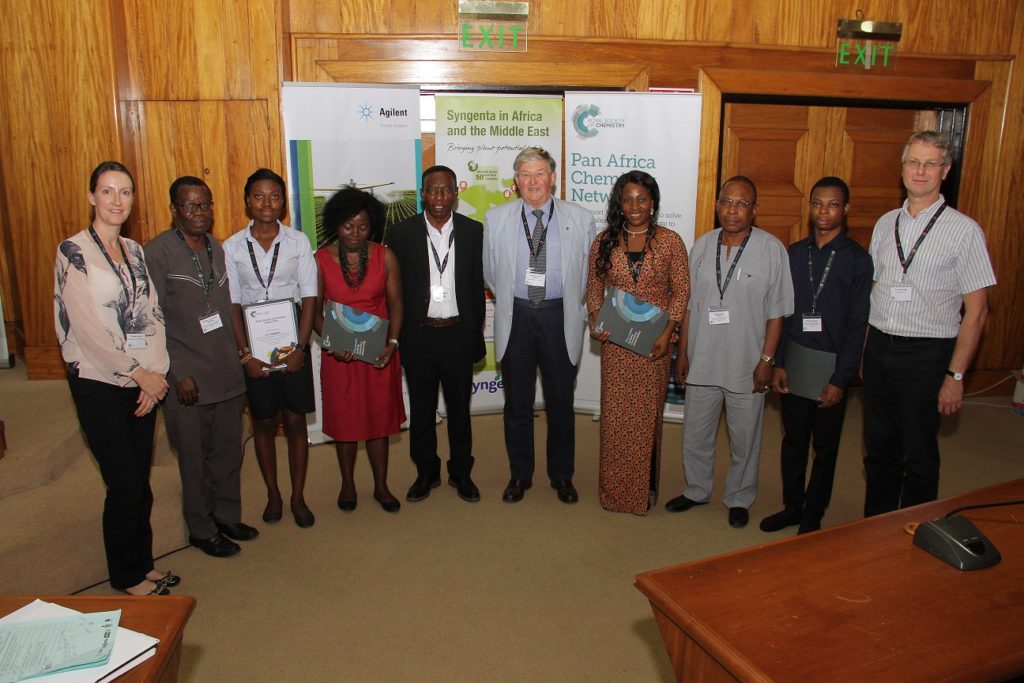 1st UK Microfluidics for Analytical Chemistry Conference will be held on Thursday 1 February 2018 at the National Oceanography Centre in Southampton, UK.

It will provide an opportunity to discuss recent developments in the field and develop future research opportunities as part of an overall aim to nurture and promote the UK microfluidic and analytical communities. This will also offer PhD students and early career researchers a chance to present their work.

The 34th International Symposium on Microscale Separations and Bioanalysis (MSB 2018) is to be held at the conference center of the Windsor Barra Hotel (Barra da Tijuca) in Rio de Janeiro, Brazil, from February 18-21, 2018.

Since its inception in 1989 (Boston, Massachusetts, USA), MSB has evolved into an interactive forum for the discussion of cutting-edge research on the frontiers of separation science, spanning fundamental theory, method development, technology advancements to innovative applications relevant to human health, medicine, food and the environment.

MSB 2018 centers on science and people by creating a confidential ambience that facilitates vigorous exchange between delegates. This edition will feature stimulating pre-conference short-courses, distinguished plenary speakers and a parallel program covering a wide spectrum of current microscale bioseparation techniques.

Since the MSB 2018 date is just one week after Carnival in Rio, delegates are invited to come a day earlier to join  a pre-symposium social activity: the Champion’s Parade of Rio Samba Schools on Feb. 17, 2018.

The Sir George Stokes Award recognizes outstanding and sustained contributions to analytical science by someone demonstrably working in a complementary field, which has led to developments of seminal importance to chemical analysis. It is awarded biennially and the winner is chosen by the Royal Society of Chemistry Analytical Division Awards Committee. We are delighted to announce that this year the award was presented to Tony Cass from Imperial College London at SciX 2017 in Reno. Tony  presented his prize lecture on Tackling Global Health Challenges with Biosensor Technologies on the 9th of October. Congratulations Tony! 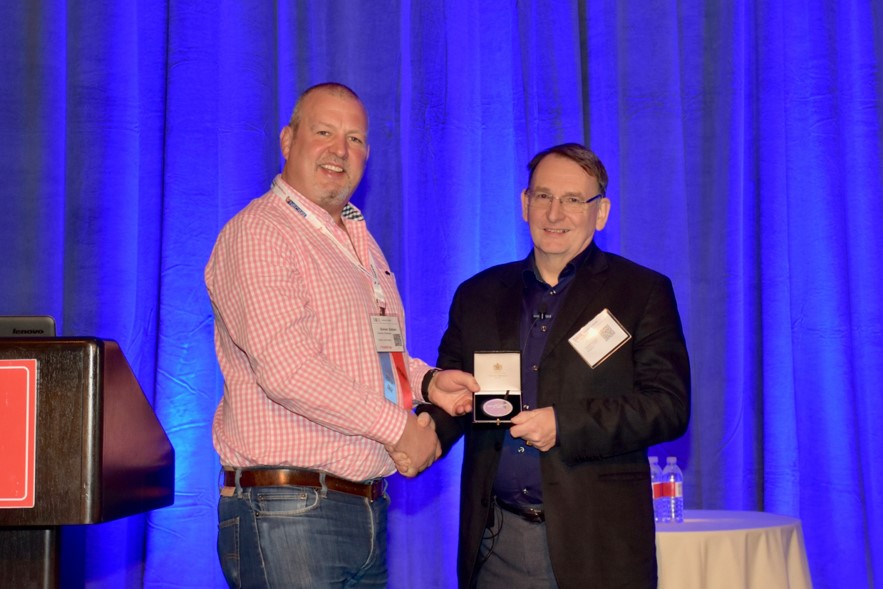 It also gives us great pleasure to announce that Analyst Chair Duncan Graham and Analytical Methods Editor-in-Chief Scott Martin both received awards at SciX 2017. The Charles Mann Award for Applied Raman Spectroscopy was awarded to Duncan Graham, who delivered his Plenary lecture “Mann up, SERS Can be Useful!” on Tuesday 10th October. Scott Martin was the recipient of the AES Mid-Career Award. After being presented with his award, Scott delivered a plenary lecture titled  “Using Microchip Electrophoresis and Electrochemical Detection to Investigate Cellular Communication”. We are extremely proud of Scott and Duncan. Congratulations on well-deserved awards. 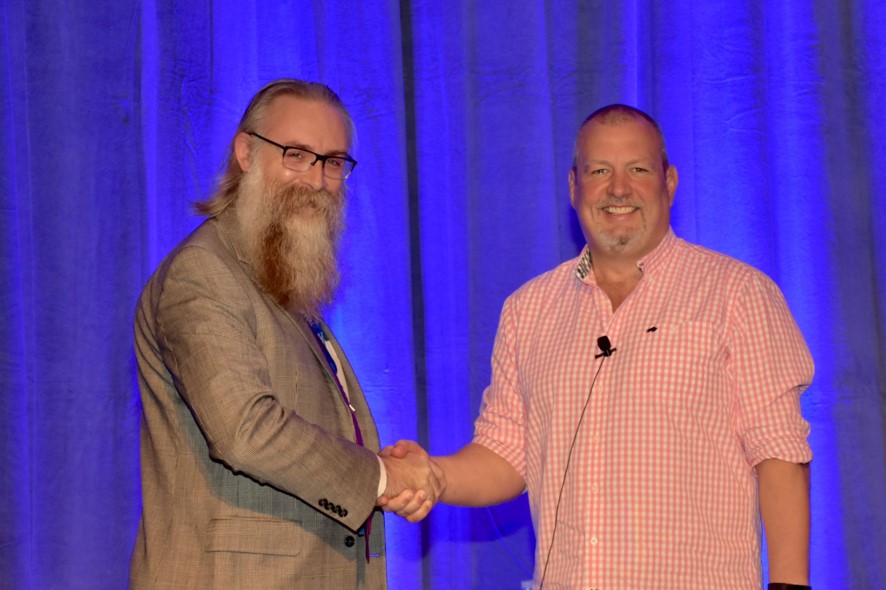 Duncan Graham, Chair of Analyst, is presented with the Charles Mann Award for Applied Raman Spectroscopy by Ian Lewis from Kaiser Optical Systems 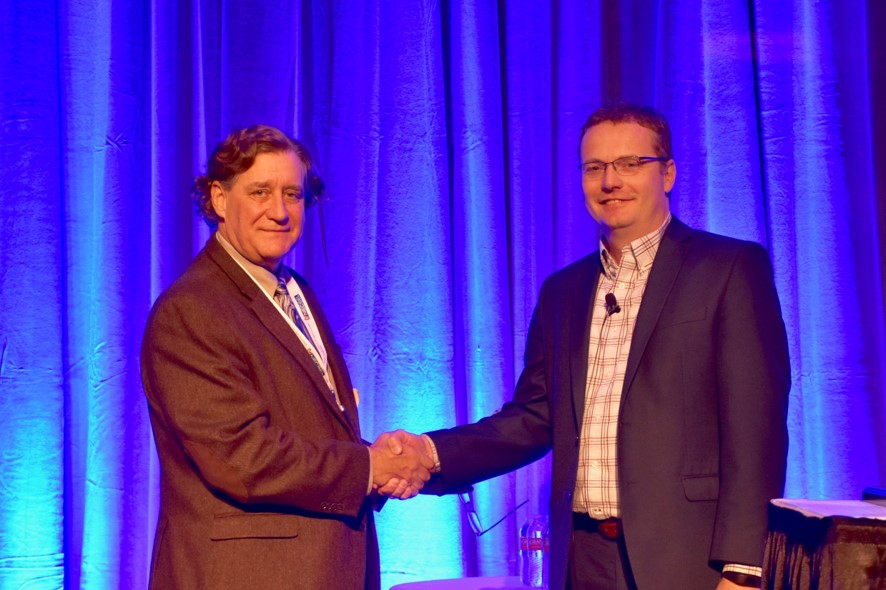 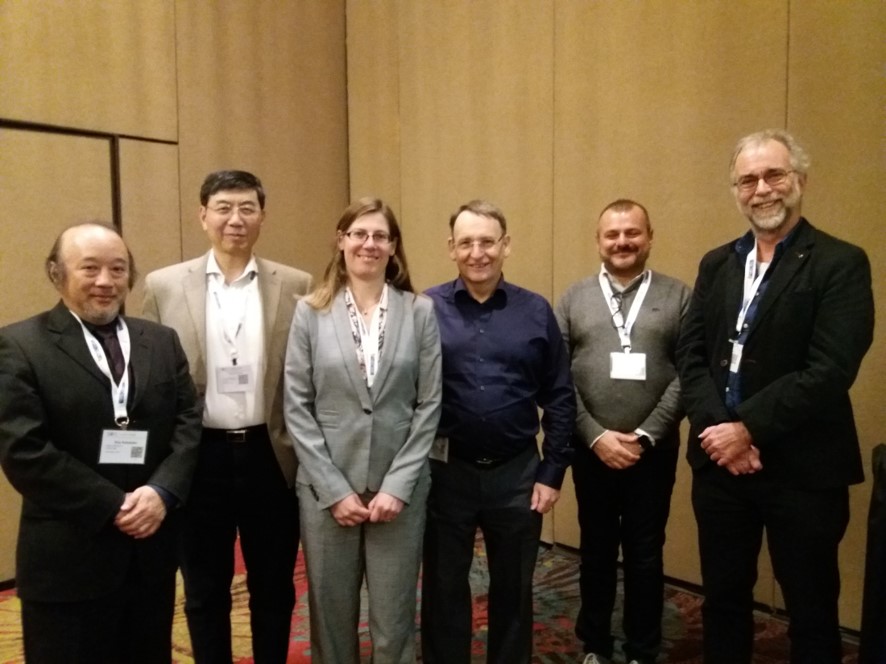 Thank you to all our session speakers!

Spring SciX is a UK-based meeting of the successful SciX series, covering a wide range of analytical chemistry research, with a focus on early career researchers. Join leaders in the analytical sciences as they present progress on emergent topics, meet with exhibitors, and network over four days in Glasgow. Find out more at http://springscix.org/

We hope to see you there!

Along the lines of the long traditions of Euroanalysis, the meeting will cover all aspects where analytical chemistry plays a role including fundamental and applied sciences. It will offer plenary and keynote presentations on cutting-edge topics by internationally renowned leaders of the field, followed by contributed talks and poster presentations to stimulate interdisciplinary discussions. In addition, a young researchers’ session will be organized to provide opportunities for and encourage Ph.D. students and postdocs to share their findings.

The conference has attracted about 500 participants from more than 30 countries, covering academia, governance and industry. The organisers hope that this will help to strengthen the networks between chemical societies and their members, working in diverse fields.

In addition to the lectures offered in the program, there are also opportunities to visit the exhibition, attend short courses and vendor’s seminars. A number of prominent analytical chemists will also be awarded.

Electrochem 2017 will be held at the University of Birmingham, UK, from Sunday 10th – Tuesday 12th September, 2017

The Corrosion Science Symposium has been held annually since its launch in 1960 by Prof. L.L. Shreir. It is an ideal opportunity for students and young researchers in corrosion science from across Europe to congregate, discuss their work, share ideas and, above all, enjoy themselves in a stimulating environment. Contributions are invited in all areas of corrosion science and engineering.

The Analytical Research Forum 2017 was held on the 7th of July at Burlington House in London. The interdisciplinary one-day event featured invited talks, flash presentations and poster presentations on an impressive range of analytical techniques and applications. From the analysis of the hidden art beneath Rembrandt’s paintings to conducting life science experiments in outer space, the variety and calibre of work was of the highest standard.

Prizes were awarded by the RSC Analytical Chemistry Trust Fund to the best contributed talks and flash presentations. We are pleased to offer our congratulations to the prize winners:

The Royal Society of Chemistry also awarded subscriptions to our journals Analyst, Analytical Methods and Lab on a Chip as prizes for the best posters on the day. We are delighted to recognise the excellent work of the following prize recipients:

Andrew Donohoe and Fay Nicholson accept their awards from Melissa Hanna-Brown,
President of the Royal Society of Chemistry Analytical Division

Congratulations to all the prize winners and many thanks to all the participants who contributed to a vibrant and exciting meeting!

‘Newton Fund Researcher Links Workshop’ will be held at the Indian Institute of Technology, Kanpur, India, from 6th – 8th November, 2017.

The ‘Newton Fund Researcher Link Workshop’ provides opportunities for early career researchers from the UK and internationally to interact, learn from each other and explore opportunities for

building long-lasting research collaborations. As part of this programme, early career researchers are now being recruited to participate in the workshop.

The workshop will provide a unique opportunity for sharing research expertise and networking. During the workshops, early career researchers will have the opportunity to present their research in the form of a poster/short oral presentation and discuss this with established researchers from the UK and partner countries. There will be a focus on building up links for future collaborations and participants selected on the basis of their research potential and ability to build longer term links.

The Newton Fund will cover the costs related to the participation to the workshop, including: travel (both international and local), accommodation and meals. Costs for the visa will be covered; however, participants will be responsible for making all the necessary arrangements. Although this cost will not be covered by the Newton Fund participants are encouraged to purchase an adequate travel and medical insurance.

You are cordially invited to the Microfluidics Congress: USA in Philadelphia on 24th – 26th July 2017. Join our community of leading academics and scientists from biotechnology & pharmaceuticals organizations who are working to transform healthcare by harnessing the developments of these new and overlapping technologies.

Microfluidics is a rapidly developing area of research, and scientists are continually discovering the wide range of possibilities the technology can provide. At the intersection of engineering, physics, chemistry, nanotechnology, and biotechnology, microfluidics is revolutionizing the way patients are diagnosed, monitored and treated, and is unlocking the potential for reduced reagent consumption and thus, cost.


The conference will examine the latest developments in the technologies and techniques being used for progressing medical research, as well as the challenges and future of microfluidics. Registration is now open here. 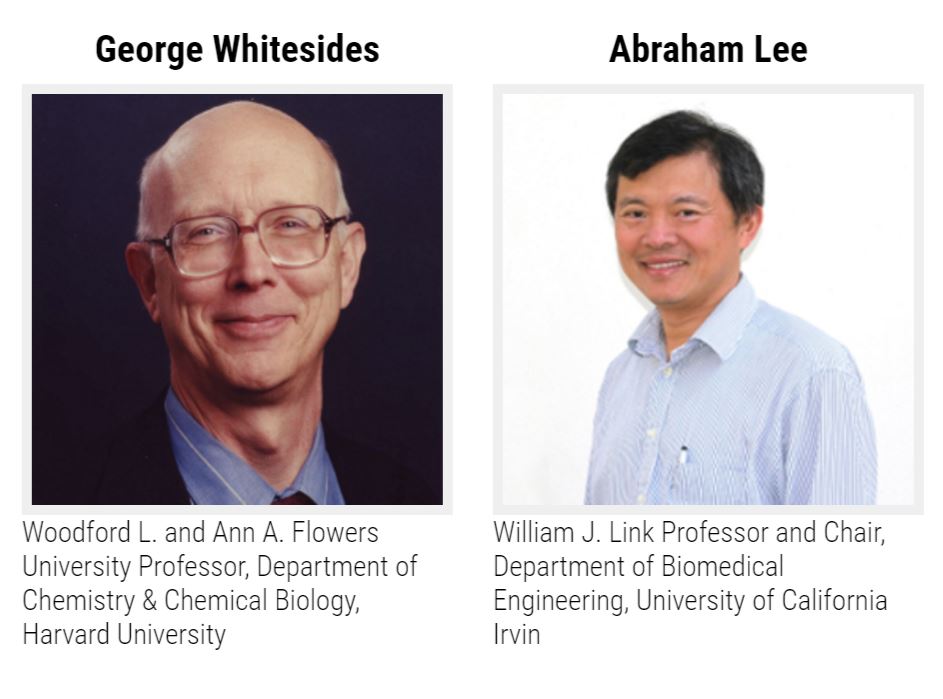 Some of the topics to be covered:

Keynote speakers will include Lab on a Chip Editor-in-Chief  Abraham Lee and Advisory Board member George Whitesides. See the agenda for further details.

Enhance your itinerary with pre & post event workshops. Lab on a Chip Advisory Board member Holger Becker (microfluidic ChipShop GmbH), will lead a 4 hour workshop on Lab-on-a-Chip technologies as an enabling technology for new product development in diagnostics and the life sciences.

MSB 2017 was held from March 26th – 29th, in Noordwijkerhout, The Netherlands. Analytical Methods was involved in the best poster competition, along with sister journal Analyst and fellow RSC journal Lab on a Chip. The competition was Judged by an international panel of scientists, which was chaired by Dr Monika Dittman, Agilent Technologies, Germany. All posters were judged on the following criteria:

Novelty and originality of the work, creativity and potential for innovation;

Readability of the presentation and author’s explanations. 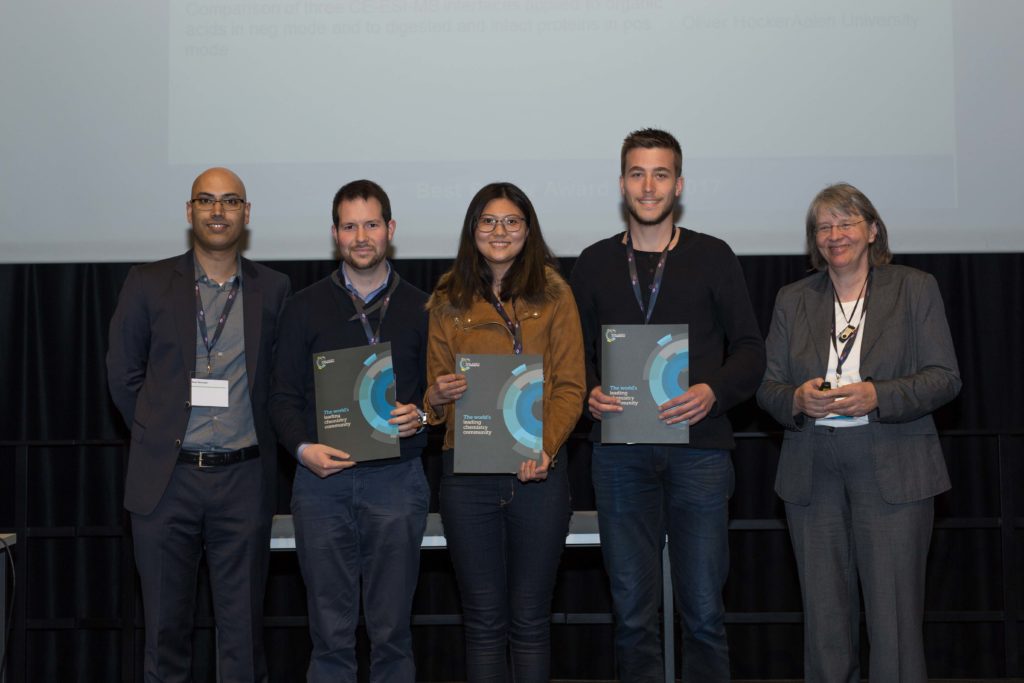