So, to show you all how we closed the year, here are our last events of 2019.

Similar to at the Brazilian Chemical Society Meeting in 2019, where a Women’s Hub was created and a prize named after Prof Dr Vanderlan Bolzani awarded, sections discussing Women in Science issues were held at the BrazMedChem symposium and at the 20th CBCat. Discussion included numbers from Academia (data from CNPq) to show how women are progressing as whole in Chemistry (or Science) but are not achieving as many higher decision-making positions as men. The big question: why is that? There are multiple answers and still lots of discussion to be had.

Prof. Marisa Orth gave a nice overview at the CBCat with numbers from a CNPq database and Prof Heloise Pastore moderated a friendly discussion with the audience. One thing was obvious: men have to take part in this as an important agent to change the future. These numbers corroborate with our recently launched Report on Gender Bias in Publishing.

Later on in September, in a different location (Federal University of Pelotas-UFPel-RS), our recent recipient of the JAAS Lectureship, Prof Marcia Mesko, with the RSC Brazil office’s support, coordinated a panel discussion totally dedicated to diversity and inclusion of women, the “She/Her on Science”, with lectures and panel discussions dedicated to the subject.

With experienced and young female researchers in the discussions [Profs Drs Márcia Barbosa (UFRGS), Maysa Furlan (CAPES and UNESP), Ethel Wilhelm, Lucielli Savegnago,  Márcia Mesko, Mariana Vieira, Rosélia Spanevello (all from UFPel), Laura Fonseca (UFSM), Vanderlan Bolzani (UNESP), Fernanda Staniscuaski (UFRGS), Hellen Stulzer (UFSC), Marina Prigol (UNIPAMPA), Paola Mello (UFSM), Marina Trevisan (UFRGS)], the subjects varied between challenges for young female scientists in the South, parenthood in science, gender equity, awards’ impact, institutional action on gender inclusion and perspectives from new young female talent. We still have a long way to go, but those discussions, happening over and over again, will wake up the world, and especially will wake up women to be present and active in discussions and acts. Support to get support, that is how things change, little by little, grain by grain!.

As one of the last events we attended in 2019, the 7th Brazilian Conference on Natural Products was held at a military facility-IME. The Brazilian Army is well known for its intense research on flora and fauna of the country, for surveillance reasons and biodiversity security. So, vast knowledge is held by the military in the natural products area. During the conference, we had an RSC table with lanyards and Prof Peter Leadlay from Cambridge University as one of the highlights of the meeting. 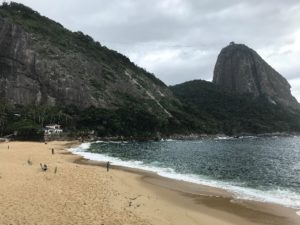 Finally, at the end of the year, RSC and the British Government joined forces and presented two seminars during the Regional South Meeting of the Brazilian Chemical Society. The meeting was held a UCS (University of Caxias do Sul) a community university. The region is well known for its regional development linked to basic industries and crops, and also a huge German-Italian immigration community.

RSC contributed a How to Publish seminar, talking about the mission and vision of RSC, as well as what our journals can offer for authors in the country, along with other offerings, such as Chemistry World and our databases such as ChemSpider and MarinLit. Afterwards, the Chevening director in Brazil, Dr James Edward, presented the Chevening Brazil program, how these scholarships work and its objectives: to find leaders coming from the hard sciences, who normally don´t apply. The SBQ-Sul was a good audience for both RSC and Chevening. 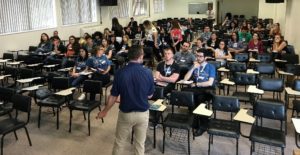 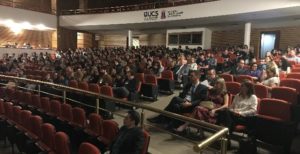