Dielectric Response of 1,1-Difluorosumanene Caused by an In-Plane Motion

Organic molecule-based crystalline dielectric materials have attracted broad attention from chemists in recent years to develop new organic electronic devices. In their designing strategy, the molecular motion induced by the external dielectric field is required to maximize the polarization effect in the materials to realize a large dielectric constant.

When people pay attention to the molecular motion in curved-π aromatics and their supramolecular complexes, it is assumed that the “curve-to-curve” contact in the curved-π aromatics will afford the smooth molecular motion in the solid state. Sumanene (1) is one of the representative buckybowls and is known to show unique properties such as bowl inversion behaviour derived from its unique bowl shape and is recognised as the potential molecular switch (Figure 1a). However, another feature of 1 to form unidirectionally arraigned π-stacking columns in the solid state makes the bowl inversion behaviour of 1 useless for the switching applications due to the large bowl-inversion energy in the 1D-column formation. 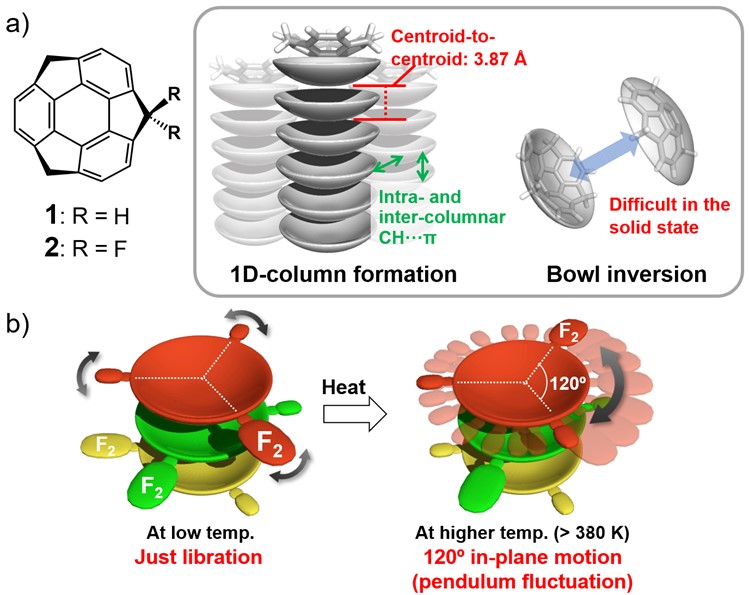 Figure 1. a) Molecular structures of 1 and 2 and schematic diagrams of the features of 1. b) Pendulum-like in-plane motion of 2 exhibiting a dielectric response in an electric field.

Recently, the group of Osaka University and collaborators of Tohoku University, Tokyo Institute of Technology and Kyoto University have demonstrated that the in-plane motion of disfluorinated sumanene 2 in the solid state is applicable as the source of stimuli responsive function instead of the bowl inversion to bring out the dielectric response (Figure 1b).

The group has focused that 2 possesses two fluorine atoms on the same benzylic carbon on pristine sumanene to possess a large dipole moment along the in-plane direction and gives the isostructural crystalline packing to 1. Thermal analyses, variable temperature X-ray diffraction and IR measurements indicated the presence of pendulum-like in-plane motion of 1 at high temperature region although no clear phase transition was involved. Indeed, the dielectric measurement using its both powder and single crystal clearly showed that both real (ε1) and imaginary (ε2) parts of the dielectric constant were enhanced above ~360 K at 1 MHz with a Debye-type dielectric relaxation, confirming the in-plane motion of 2 induced by the external electric field (Figure 2). 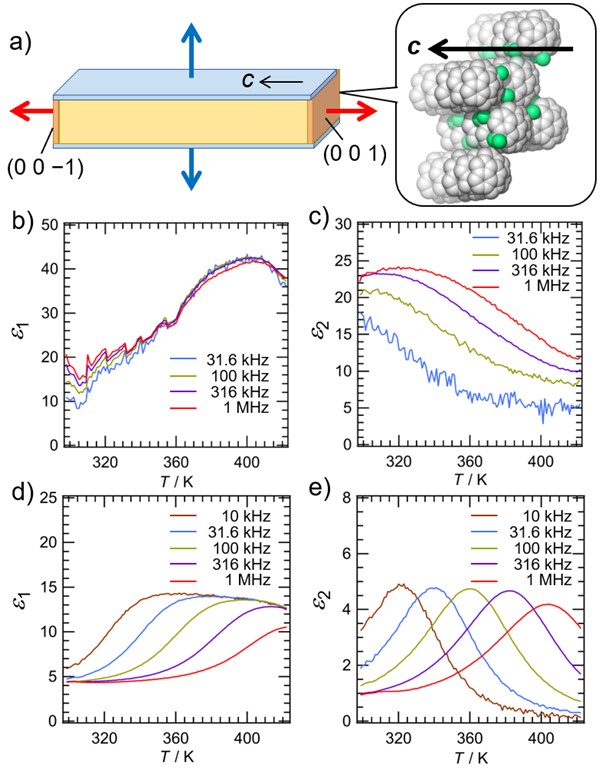 Figure 2. a) Schematic model of the relationship between the single-crystal shape of 2 and the applied electric field. b) to e) Temperature dependence of b), d) the real part (ε1) and c), e) the imaginary part (ε2) of the dielectric constant of 2 in a single-crystalline form measured at various frequencies. The direction of the electric field applied for b) and c): parallel to the c axis; for d) and e): orthogonal to the c axis.

These results, focusing on the in-plane molecular motion in the π-stacking column of a buckybowl, will help to provide a better understanding of the dynamics of solid-state curved-π systems and will accelerate their application in functional materials. 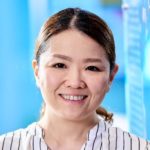 Yumi Yakiyama is an associate professor in the Division of Applied Chemistry at Osaka University (Japan). She got a PhD degree in Chemistry at Osaka University in 2010. From 2010 to 2015 she did postdoctoral studies at POSTECH (Korea). The research field of Professor Yumi Yakiyama is physical organic chemistry especially about functional organic crystals as well as metal-organic and pure organic frameworks.