Archive for the ‘Reviews’ Category

Both of these featured articles are FREE to access for the next 6 weeks, why not have a read and let us know your thoughts by commenting below.

The Communication highlighted on the inside cover of this issue comes from Pandi Muthupandi and Govindasamy Sekar, Indian Institute of Technology Madras, and presents the synthesis of an unusual dinuclear chiral iron complex that was used to asymmetrically hydrophosphorylate aldehydes to synthesis optically active α-hydroxy phosphonates.

Synthesis of an unusual dinuclear chiral iron complex and its application in asymmetric hydrophosphorylation of aldehydes
Pandi Muthupandi and Govindasamy Sekar
DOI: 10.1039/C2OB25810B

Other great content in this week’s issue of OBC includes:

Comments Off on View OBC issue 28 today – it’s out now!

The front cover (right) of this issue of Organic & Biomolecular Chemistry features the work Takashi Takahashi and colleagues at Tokyo Institute of Technology. Takahashi et al. present a two-stage continuous-flow synthesis of activated vitamin D3, the first application of a micro-flow system to this synthesis. The authors claim that the synthesis should be easy to scale up and that it required no purification of intermediates or high dilution conditions, and so reducing wastage.

The inside cover (left) highlights work by Chihiro Maeda and Naoki Yoshioka, Keio University, on the synthesis of peripherally ethynylated carbazole-based core-modified porphyrins. Maeda and Keio make use of a series of metal-catalyzed coupling and annulation reactions to produce the porphyrins whose π-conjugated networks are shown to effectively delocalise over the entire macrocycle.

As always these cover articles are free to access for 6 weeks.

Also in this issue is this HOT communication:

And, the perspective ‘Strategies for the enantioselective synthesis of spirooxindoles’

The latest issue of OBC is now available to access, and here’s a quick peek…

Steaming its way on to the front cover is this image (right) from Alejandro Parra & José Alemán et al. Their perspective gives the reader a general overview of some of the most relevant topics in the applications of chiral metallic organophosphates, and includes a selection of the most outstanding uses of these catalysts.

And coming into bloom on the inside cover is this image (left) highlighting the work Hongjie Zhang et al. describing the isolation and structure elucidation of 3 novel abietane diterpenoids, rubesanolides C–E (1–3) from the leaves of the medicinal plant Isodon rubescens

Read both for FREE for the next 6 weeks!

As well as many excellent papers, there is also this perspective by Ramakrishna Edupuganti and Franklin A. Davis on the synthesis and applications of masked oxo-sulfinamides in asymmetric synthesis.

The front cover of this week’s issue highlights the work of Rich G. Carter, Oregon State University, and colleagues. In this paper Carter et al. present the development of a proline sulphonamide-catalysed method that facilitates the annulation of α-aryl, α-alkyl-disubstituted aldehydes with acyclic enones to produce highly functionalized cyclohexenones with very good degrees of diastereoselectivity and enantioselectivity.

The inside cover highlights the review of Brian Rasmussen and Jørn Bolstad Christensen that looks at the growing field of organocatalysis with dendrimers. This review outlines advances made in this area of organocatalysis and covers both interior- and surface-based examples, the catalysis of reactions ranging from functional group interconversion and C–C bond forming reactions to enzyme mimicking processes.

Review: Modulation of the antioxidant activity of phenols by non-covalent interactions

This review by Riccardo Amorati and Luca Valgimigli, University of Bologna, is featured in issue 21 of OBC, which can now be found online.

In this Perspective Amorati and Valgimigli summarize some recent results obtained with simplified models, which can aid in understanding the effects of non-covalent interactions, i.e.  intra- and inter-molecular H-bonds, on the radical chemistry of natural phenolic and polyphenolic antioxidants.

Areas of discussion include: 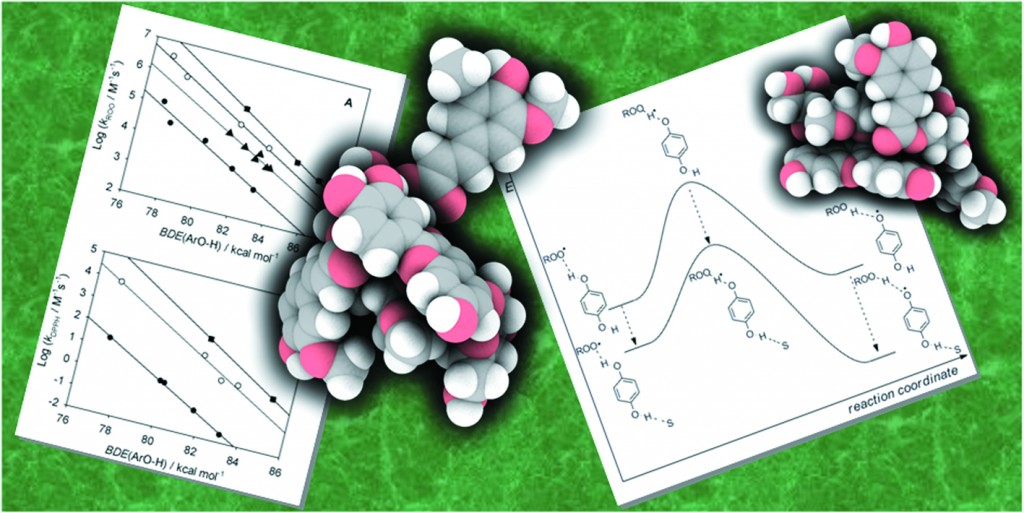 Comments Off on Review: Modulation of the antioxidant activity of phenols by non-covalent interactions

On the front cover is this HOT Emerging Areaarticle from Peter R. Schreiner and co-workers (Justus-Liebig University, Germany) who discuss quantum mechanical tunnelling and provide an overview of the importance of tunnelling in organic chemical reactions.
Discussion includes:

On the inside front cover is this Communication, from Ying-Yeung Yeung and colleagues at National University of Singapore, where a facile and highly enantioselective route to 2-substituted 3-bromopyrrolidines is presented. The authors demonstrate how these can be reached via the bromo-aminocyclisation of 1,2-disubstituted olefinic amides using amino-thiocarbamates as a catalyst. This is also part of our growing Organocatalysis web collection.

Both of these cover articles will be free to access for the next 6 weeks.

Emilio M. Pérez and Nazario Martín present an Emerging area article providing an overview of some of the few successful examples of chiral recognition of carbon nanoforms, highlighting their common features with the aim of helping to develop general trends for the design of new generations of hosts.

The inside front cover illustrates work by Concepción González-Bello and co-workers at Universidad de Santiago de Compostela and University of Newcastle upon Tyne, who synthesised several 3-alkylaryl mimics of the enol intermediate in the the reversible dehydration reaction of 3-dehydroquinic acid, which is catalysed by type II dehydroquinase, to investigate the effect on the inhibition potency of replacing the oxygen atom in the side chain by a carbon atom.

A perspective by María Paz Muñoz covering the progress in transition metal-catalysed intermolecular reaction of allenes with oxygen nucleophiles, analysing the intermolecular metal-catalysed reaction of allenes using palladium, iridium, rhodium, ruthenium, gold and platinum, in the presence of alcohols, water or carboxylic acids, and the mechanistic implications of these processes depending on the metal used.

Promiscuous enantioselective lactamase activity on the cover of OBC issue 17

This week’s OBC cover highlights the work of Aurelio Hidalgoand co-workers at the Center for Molecular Biology, whose paper describes the promiscuous enantioselective (−)-γ-lactamase activity in Pseudomonas fluorescensesterase I. In the paper Aurelio Hidalgoet al. show how the introduction of a mutation to the wild esterase improved the reaction turnover without affecting the enantioselectivity. Read the paper to find out more…..

This paper is FREE to access for the next 6 weeks, so why not take a look at it.

The outside front cover of this week’s OBC is a communication from Barbara Zajcand colleagues at The City College and The City University of New York presenting a mild and efficient synthesis of 1-aryl-1-fluoroethenes from benzothiazolyl (aryl)fluoromethyl sulfones and paraformaldehyde, under DBU- or Cs2CO3-mediated conditions at room temperature.

The inside front cover is work from Keisuke Kato et al. at Toho University on the cyclization–carbonylation–cyclization coupling reaction of γ-propynyl-1,3-diketones catalysed by palladium(II)-bisoxazoline complexes to give symmetrical ketones bearing two oxabicyclic groups in moderate to excellent yields.

Comments Off on OBC issue 16 has landed!