Below is the rather striking suggestion from Brimble et al. The tree and leaves represent nature, and its dew, superimposed with their spiroacetal-triazoles, drops into a pool of tablets representing the development of new therapeutic agents. 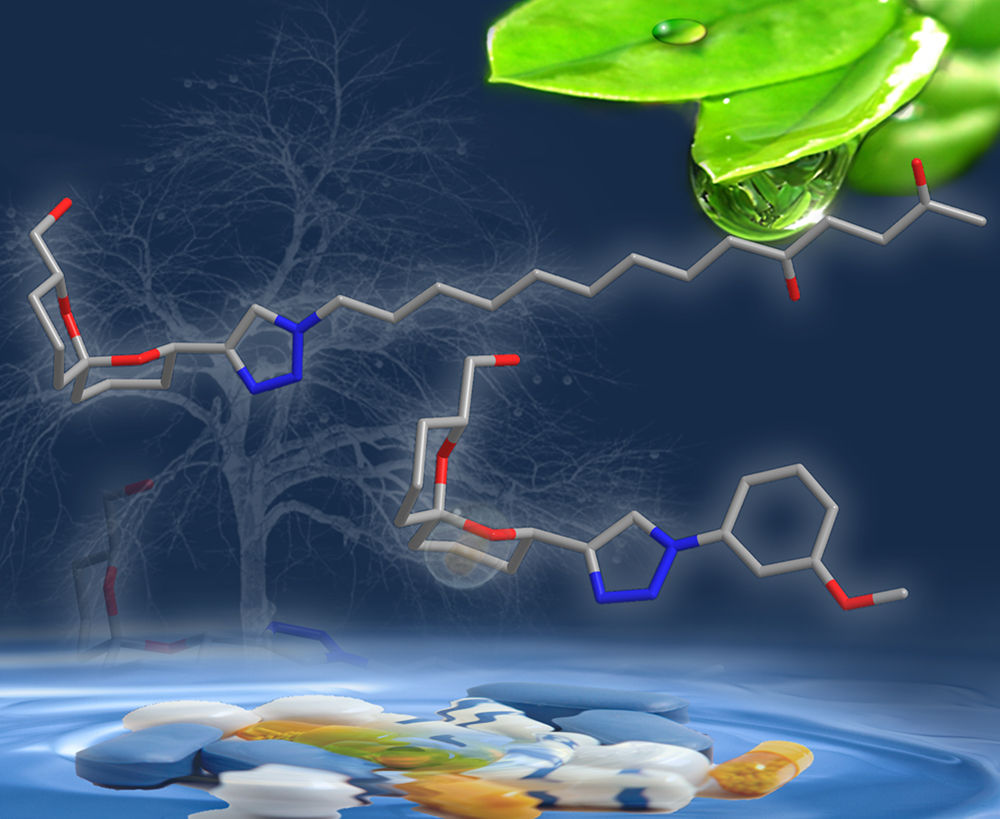 This second suggestion comes from Luh et al., featuring a decameric ladderphane in recognition of the 10 years that OBC has been published. 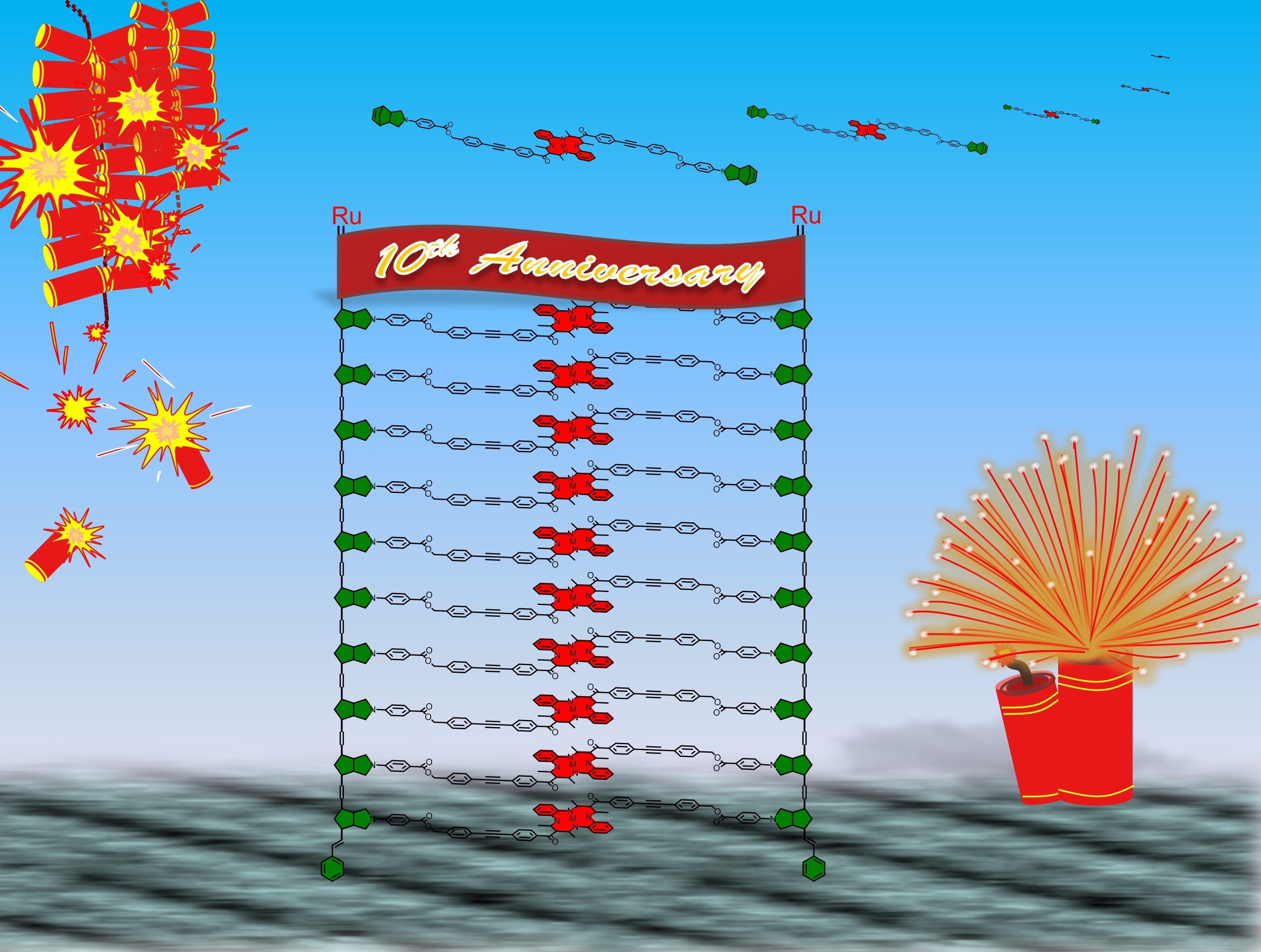 Now you’ve seen the art, why not see the science? View the entire issue, featuring 68 articles from the breadth of OBC‘s scope by leaders in the field!

The 10th anniversary issue of OBC has arrived! This celebratory issue contains a massive 68 articles of great science from investigators at the forefront of current research. View the entire issue here….

This nice front cover is courtesy of Eric H. Fort and Lawrence T. Scott who report the high reactivity of dimesitylbisanthene toward bay region air oxidation, leading to a bay region quinine. Fort and Scott say that “this finding signals a warning about the potential oxygen-sensitivity of hydrogenterminated carbon nanotubes; a single oxidation of this sort on the cylindrical rim of a growing carbon nanotube would preclude further elongation of the tube by the Diels–Alder cycloaddition/rearomatization protocol and would thereby terminate the growth.”

Also geared towards celebrating our 10th anniversary is this inside cover from Naoki Komatsu et al., which highlights their paper reporting on the optical enrichment of single-walled carbon nanotubes (SWNTs) with (n,m) other than those so far reported, together with their simultaneous separation according to their diameters by preferential extraction of commercial SWNTs with 2,6-pyridylene-bridged chiral diporphyrin nanotweezers.

Finally, the entire Organic & Biomolecular Chemistry team we would like to thank all of our Associate Editors, Editorial and Advisory Board members, authors and referees, without whom none of this past decade would have been possible, and we hope to work with you all to make the next 10 years even more successful.

After much anticipation the themed issue marking the 10th anniversary of Organic & Biomolecular Chemistry will be published this week, and it’s a bumper issue full of work from many at the forefront of current research who have continued contribute to the success of OBC over the past decade.

Ahead of the issue’s publication we have prepared a FREE collection of all the HOT articles that can be found within its covers, and considering all the talent that has contributed it is quite a big collection. These will all be free to access until the end of July.

END_OF_DOCUMENT_TOKEN_TO_BE_REPLACED

10 of the best: Synthesis in Organic & Biomolecular Chemistry

In this addition of OBC’s ’10 of the best’ we are bringing you a selection of 10 of our most highly cited synthesis articles. As with the other blogs, every single one will be free to access for you to enjoy until July 11th.

Missed our other 10th anniversary posts? Take a look here for more of our top cited work from the past 10 years.

10 of the best: Supramolecular chemistry in OBC

This week we’re going supramolecular as we celebrate OBC’s 10th anniversary! Below is a selection of 10 of our most highly cited articles in the area of supramolecular chemistry. Every single one will be free to access for you to enjoy for the next week.

Take a look here for some of our top cited work, including more 10 of the bests:

10 of the best: Natural Products in Organic & Biomolecular Chemistry

In the latest blog of our series celebrating OBC’s 10th anniversary we bring you a selection of 10 of our most highly cited articles in the area of natural products. Every single one will be free to access for you to enjoy for the next week.

Missed our other 10th anniversary posts? Take a look here for some of our top cited work, including 10 of the best catalysis articles and 10 of the best medicinal chemistry articles.

10 of the best: medicinal chemistry in Organic & Biomolecular Chemistry

Continuing our blog series celebrating OBC’s 10th anniversary we bring you a selection of 10 of our most highly cited articles in the area of medicinal chemistry. Every single one will be free to access for you to enjoy for the next week.

The merger of natural product synthesis and medicinal chemistry: on the chemistry and chemical biology of epothilones
Karl-Heinz Altmann
DOI: 10.1039/B405839A

10 of the best: catalysis in Organic & Biomolecular Chemistry

In this latest blog celebrating OBC’s 10th anniversary we bring to you a selection of 10 of the most highly cited articles that cover the area of catalysis. Every single one will be free to access for you to enjoy.

Do you remember these articles? Have they influenced your work? Share your comments below, we would love to read them.

The best of bioorganic from Organic & Biomolecular Chemistry

Our 10th anniversary themed issue is well under way, with many articles now published online. Here is just a taster of some of the hot articles that are included in the collection so far: 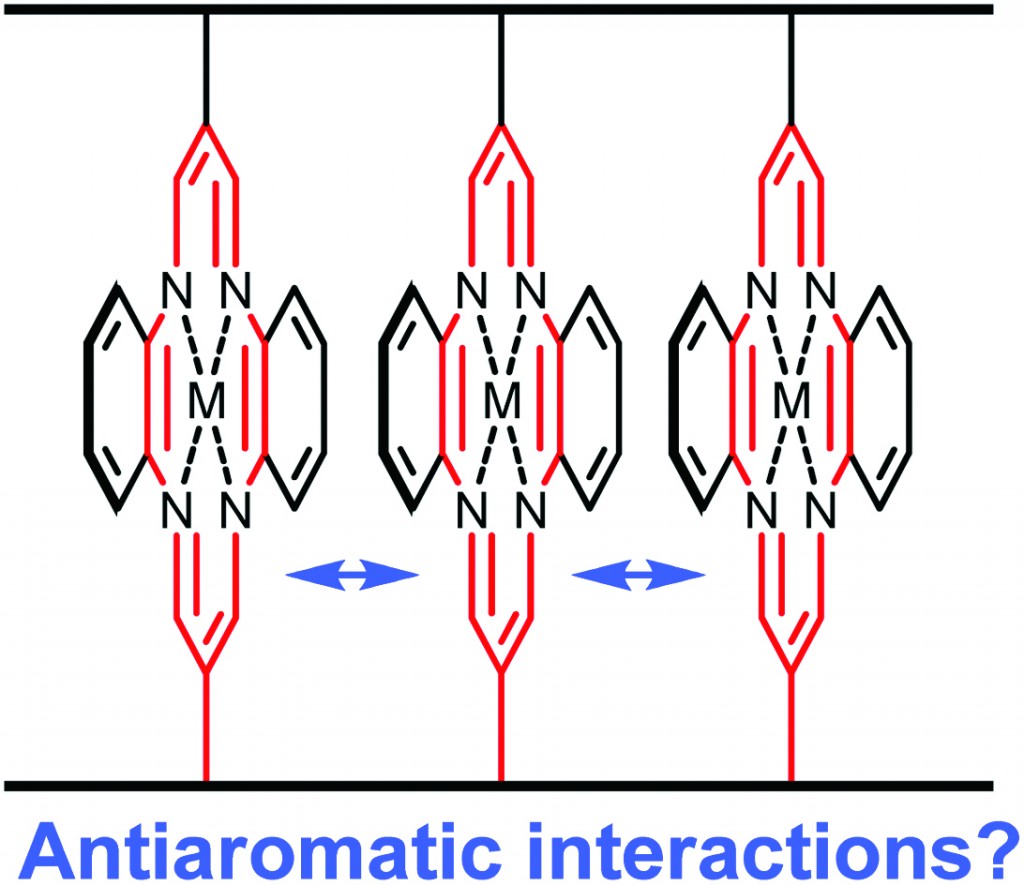 These 4 HOT artilces will be FREE to access for the next 4 weeks.

There are plenty more articles HERE, covering many different and interesting topics. Why not take a look, we’re sure you’ll find something you will like.

In the weeks to come we will be highlighting more of the hot articles that have been published for our 10th anniversary issue so watch this space!