In the July Editor’s Collection, Judy Wu highlighted ‘Water binding stabilizes stacked conformations of ferrocene containing sheet-like aromatic oligoamides’ by Michael L. Singleton et al. as one of her personal favourite recent Organic & Biomolecular Chemistry articles. Here, we catch up with the authors to find out a little bit more about their research 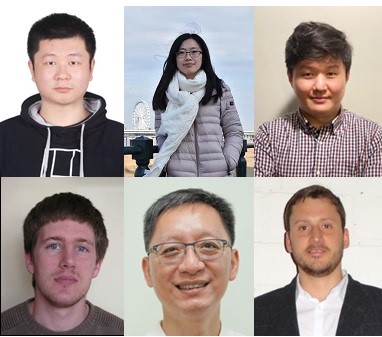 Dr. Ya-Zhou Liu was born in Linyi, China. He received his MSc degree from Guizhou University in 2015 under the supervision of Prof. Weidong Pan. He then joined the Université Catholique de Louvain for his PhD degree under the supervision of Prof. Istvan E. Marko on the development of indole chalcones for non-apoptotic cancer cell death. In 2017, he joined Prof. Michael L. Singleton’s group to continue his PhD research under the topic of using non-covalent interactions to control fluxional molecules into ordered conformations. After receiving his PhD degree in 2020, he joined the Chengdu Institute of Biology (CIB), Chinese Academy of Sciences as an assistant research fellow with Prof. Xiaofeng Ma, working on the development of enzyme-mimetic catalysts.

Dr. Xiao Mu was born in Zibo, China. She received her MSc degree from Zhejiang Normal University in 2015. In 2016, she arrived in Belgium and started her doctoral studies sponsored by the China Scholarship Council under the supervision of Prof. Michael Singleton on the topic of histidine brace-containing ligand scaffolds for developing biomimetics of lytic polysaccharide monooxygenases. She received her PhD degree in 2020.

Dr. Chieh-Kai Chan received his B.S. from the Department of Medicinal and Applied Chemistry, Kaohsiung Medical University in 2012. He later obtained his M.S. in 2014 and PhD in 2017 in the same department under the supervision of Prof. Meng-Yang Chang . He has been performing his postdoctoral studies with Prof. Cheng-Chung Wang in the Institute of Chemistry at Academia Sinica since 2017, and was awarded the Postdoctoral Scholar Program from Academia Sinica in 2018 and 2020. His current research interests are carbohydrate chemistry, the development of methodologies on small molecules and their applications on drug screening.

Dr. Koen Robeyns was born in Flanders, Belgium. He started undergraduate studies in chemistry at the KULeuven, Kortrijk, and completed his graduate studies at the KULeuven, Leuven, where he was first introduced to crystallography. He began his PhD studies in 2002 on the structural determination of modified DNA sequences, which he defended in 2006. After some years of postdoctoral research, combining both small-molecule and macromolecular crystallography, he moved to the UCLouvain, where he now works as permanent researcher in charge of single crystal studies.

Dr. Cheng-Chung Wang is an Associate Research Fellow at the Institute of Chemistry, Academia Sinica, Taiwan. He received his Ph.D. from TIGP, Academia Sinica under the supervision of Prof. Shang-Cheng Hung in 2008. He joined Prof. Peter H. Seeberger’s laboratory for his postdoctoral research at ETH, Switzerland, in 2008, and then moved to the Max-Planck-Institute of Colloids and Interfaces with Prof. Seeberger in 2009. He started his independent career in 2010, and his group in Academia Sinica is currently focusing on stereoselective glycosylation reactions, the synthesis of complex carbohydrate molecules and facile preparations of small molecules.

Dr. Michael Singleton received his PhD in 2010 from Texas A&M University under the supervision of Prof. Marcetta Darensbourg. He then moved to Bordeaux, France, where he worked as a Marie Curie Postdoctoral Fellow at the European Institute for Chemistry and Biology, working with Prof. Ivan Huc. In 2014, he started his independent career in the Institute of Condensed Matter and Nanoscience at the Université Catholique de Louvain in Belgium. His group’s research focuses on the synthesis and structural control of self-organized/self-assembled molecular architectures for mimicking the reactivity of biological molecules.

Large-scale conformational changes in certain proteins can lead to switching of their function or self-assembly properties. Mimicking this process with synthetic oligomers can be used to control self-assembly, permit exchange between larger self-assembled structures, or to change interactions with small molecules.  The current work stems from this idea and our interest in understanding factors that can influence the stability of different folded states.

What do you personally feel is the most interesting/important outcome of your study?

The fluxional character of aromatic oligoamides is not only important as it relates to the stability of their structures, but also to their applications in molecular recognition and catalysis. As numerous members of this type of foldamer have been shown to bind discrete water molecules in the solid state and/or solution, this study highlights the influence this binding can have on the fluxional properties of the oligomer.

What directions are you planning to take with your research in future? What are you going to be working on next?

In the near future, the next steps will be finding conditions or sequences that allow stabilizing or switching to other conformations, for example helices or double helices. Ultimately, it will be interesting to use this conformational exchange to permit one aromatic oligoamide  sequence to perform multiple distinct functions, for instance, incorporating catalytic sites and switching between different catalytic reactions.

See every article in the full Editor’s Collection