In this month’s Editor’s Collection, Associate Editor Lei Liu highlighted ‘Development of functionalized peptides for efficient inhibition of myostatin by selective photooxygenation’ by Taniguchi, Hayashi et al. as one of his personal favourite recent Organic & Biomolecular Chemistry articles. Here, we catch up with some of the authors to find out a little bit more about their research. 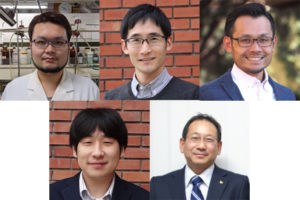 Hideyuki Okamoto obtained his B.S. in pharmacy (2020) from Tokyo University of Pharmacy and Life Sciences. At present, he is a Ph.D. candidate in the graduate school of the university. He is studying the inhibition of bioactive proteins by photooxygenation.

Dr. Atsuhiko Taniguchi obtained his Ph.D. degree at Kyoto Pharmaceutical University, Japan in 2009 under the supervision of Professor Yoshiaki Kiso. He served as a Japan Society for the Promotion of Science (JSPS) research fellow at the same university until 2010. He then worked at Pharmaceuticals and Medical Devises Agency (PMDA) as a reviewer. In 2012, he joined Graduate School of Pharmaceutical Science, The University of Tokyo and Japan Science Technology Agency (JST)-ERATO Kanai Life Science Catalysis Project (Professor Motomu Kanai) as a research fellow. He was appointed as a lecturer at Department of Medicinal Chemistry, Tokyo University of Pharmacy and Life Sciences (Professor Yoshio Hayashi) in 2016, and promoted to an associate professor in 2020. His current research interests include medicinal chemistry and chemical biology in the peptide and protein sciences.

Dr. Sho Konno is an assistant professor of School of Pharmacy at Tokyo University of Pharmacy and Life Sciences (TUPLS) in Japan. He received a B.S. in Pharmacy from TUPLS and a Ph.D. in Pharmacy from Graduate School of Pharmaceutical Sciences, Kyoto University under the supervision of Professor Hideaki Kakeya. After that, he joined the Professor Michael D. Burkart laboratory in Chemistry and Biochemistry at University of California, San Diego as a postdoctoral fellow. He currently develops the coronavirus protease inhibitors. His research also focuses on understanding and utilizing a peptide macrocyclase of natural product biosynthetic enzymes.

Dr. Akihiro Taguchi received his PhD in 2013 from Tokyo University of Pharmacy and Life Sciences under the guidance of Professor Yoshio Hayashi. He worked at Department of Medicinal Chemistry (Professor Yoshio Hayashi Lab.), the Tokyo University of Pharmacy and Life Sciences as an assistant professor in 2013, and promoted to a lecturer in 2020. His current research interests are focused on Peptide Chemistry (development of synthetic methodology for disulfide cyclic peptide) and Medicinal Chemistry.

Prof. Yoshio Hayashi was born in Nagano, Japan, in 1960. After receiving a B.S. at Tokyo University of Pharmacy and an M.S. at Kyoto University, he earned his Ph.D. in 1990 in the Faculty of Pharmaceutical Science, Kyoto University, under the guidance of Emeritus Prof. Haruaki Yajima and Prof. Nobutaka Fujii. His thesis was entitled “Basic research on synthetic peptide vaccines and antiviral agents”. After spending two years at Calpis Food Industry Co., Ltd. and three years at Nippon Steel Corporation (NSC) as a researcher, he was promoted to senior researcher at the Life Science Research Center of the NSC, where he stayed for another eight years. In 1999, he joined Prof. Yoshiaki Kiso’s group in the Dept. of Medicinal Chemistry of Kyoto Pharmaceutical University as a lecturer, and in 2001, was appointed as an associate professor. In 2007, he moved to Tokyo University of Pharmacy and Life Sciences as a full professor. His research interests are peptide chemistry and medicinal chemistry. He created several peptide-and peptidomimetic-based drug candidates such as Plinabulin (Phase III), negamycin derivative, myostatin inhibitory peptide and SARS-CoV 3CL protease inhibitor for the treatment of cancer, genetic disease, muscle disorder and viral infection, respectively. In recognition of his scientific contributions, in 2009, he received the Pharmaceutical Society of Japan Award for Divisional Scientific Promotions.

There is no effective treatment for muscle atrophic disorders including muscular dystrophy. We would like to provide a new therapeutic strategy based on inactivation of myostatin by photooxygenation.

What do you personally feel is the most important outcome of your study?

What directions are you planning to take with your research in future?

Read the full article: Development of functionalized peptides for efficient inhibition of myostatin by selective photooxygenation