Creating a platform for the development of photoswitchable ligand libraries

Photoswitchable small molecules have become important tools for analyzing biological systems. The discovery of light-tuneable molecules has enabled the study of intricate physiological responses within cells through precise spatial and temporal control to modulate their function. Although powerful tools, de novo design is often challenging as it requires detailed information about the structure of both the ligand and the receptor.

In a recent OBC publication, the group of Professor Ratmir Derda of the University of Alberta discusses a strategy to develop libraries of light-responsive (LR) ligands, which can be produced by grafting known LR structures, such as azobenzene, onto molecules with established biological activity. In this way, the challenges of identifying novel LR ligands can be addressed by selecting from a library of tagged LR-compounds that are already known to possess desired biological function.

Their study outlines a proof-of-concept for such a library using the synthesis of LR-bicyclic peptides, which contain a hydroxyl amine and di-chlorobenzene containing azobenzene (HADCAz) linker. 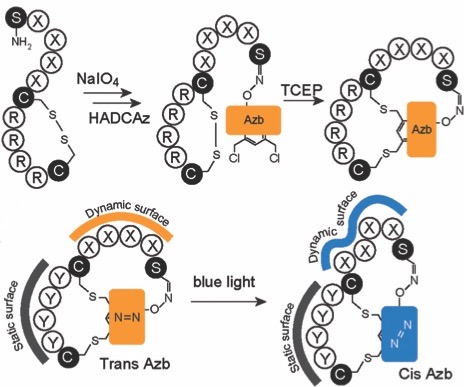 HADCAz behaves as a 3-point linchpin and can be used in the bicyclization of peptides through its orthogonally reactive ‘thiol-reactive’ and ‘aldehyde-reactive’ attachment points. The authors successfully demonstrated the synthesis of a small library of bicyclic peptides from linear, unprotected peptides (~20 amino acids in length) in a one-pot, two step reaction involving double intramolecular nucleophilic addition and oxime formation to form the two loops. The peptide-bound HADCAz linkers were shown to reversibly switch to their cis-conformers after irradiation with 365 nm light and molecular dynamic (MD) simulation was used to assess conformational changes, the properties of which were seemingly dependent on the peptide’s length.

While optimizations are still required for broad application, this work provides a versatile platform from which numerous avenues within the realms of optochemical genetics and photo-pharmacology can be explored.