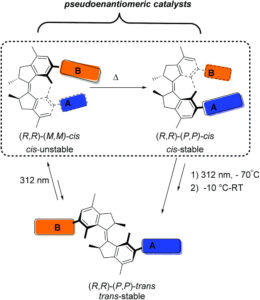 Catalysis is a fundamental concept in chemistry, allowing chemists to effectively carry out difficult transformations to access valuable materials with precision and control. For the most part, research has focused on the development of new catalysts for optimized performance to achieve high conversion and selectivity. However, special attention is now being paid to engineering catalysts whose activity can be tuned through external stimuli. This concept is ubiquitous in nature and its implementation into artificial systems offers unique opportunities and promising future applications.

A recent OBC publication by Prof. Ben Feringa of the University of Groningen Nijenborgh discusses his group’s success in developing two novel bisthiourea catalysts which display dynamic control over activity and stereoselectivity in the Henry reaction using light and heat as external stimuli.

This catalyst design is based on a molecular motor previously reported by Feringa and inspired by nature where control over function, activity and selectivity can be attained through conformational changes within the catalyst’s active site induced by external stimuli.

In the current publication, upon irradiation of the catalyst in its stable trans state, (R,R)-(P,P)-trans (see Scheme), an unstable cis state is obtained, (R,R)-(M,M)-cis, in which the catalytic groups A and B are brought into proximity to carry out the desired enantioselective transformation. The catalyst can then be converted through heating to a stable cis state, the (R,R)-(M,M)-cis isomer, via a thermal helix inversion. In this conformation, the two active groups A and B remain within reaction proximity, however, as the helicity of the motor core is inverted, a pseudoenantiomeric catalytic environment is produced which results in the formation of the opposite enantiomer.

This is the first example of a tunable bisthiourea catalyst and represents an important advancement in the field of dynamic stimuli responsive catalysis. This new area of research offers great potential for advanced materials and solving long-standing challenges that have thus far been impossible to overcome using conventional methodologies.

Victoria Corless is currently completing her Ph.D. in organic chemistry with Prof. Andrei Yudin at The University of Toronto. Her research is centred on the synthesis of kinetically amphoteric molecules which offer a versatile platform for the development of chemoselective transformations with particular emphasis on creating novel biologically active molecules.