The development of analytical devices that convert biological response into an electrical signal is a very important goal with great potential benefits for clinical diagnostics, environmental science, and defense.

In a recent communication published in Nanoscale, researchers discuss findings from a newly developed single silicon nanowire (SiNW) based biosensor, which is able to directly detect protein adsorption/desorption at single-molecule resolutions. 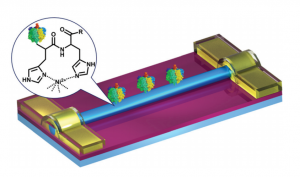 Fig. 1 Schematic demonstration of SiNW FET-based electrical biosensors, where Au electrodes are passivated by using a thermally deposited 50 nm-thick SiO2 layer. The inset shows how His-tag F1-ATPase is immobilized on the surface of SiNWs through Ni2+ chelation.

SiNW’s were synthesised following an Au-catalysed vapor deposition method and then high-density SiNW array devices were fabricated on silicon substrates using photolithography. Subsequently the devices were functionalized in a stepwise manner to impart the biomolecule recognizing Nickel functionality, and characterized with XPS and FTIR spectroscopy.

By combining theses devices with microfluidic systems, the authors were able to achieve real-time, direct detection of the chelation between Nickel and the imidazole of His-tags in the target biomolecules (F1 ATPases) at the single-event level. This nondestructive and label-free sensor shows great promise for number verification and real-time monitoring of proteins in complex biological systems.