We welcome Wolfgang Lubitz as a new Editorial Board member for EES. 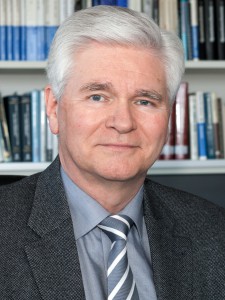 In 1989 he became Professor in the Physics Department of the Universität Stuttgart, before he took over a Chair of Physical Chemistry at the Technische Universität (TU) Berlin in 1991. In 2000 he became a Scientific Member of the Max Planck Society and Director at the Max Planck Institute for Chemical Energy Conversion (formerly Max Planck Institute for Bioinorganic Chemistry) in Mülheim/Ruhr, Germany. Professor Lubitz is an Honorary Professor at the Universität Düsseldorf. His scientific work is focused on energy conversion processes in natural and artificial photosynthesis, the investigation of metalloproteins (hydrogenases, water oxidase) and the development and application of molecular spectroscopy, especially magnetic resonance methods.

His work has been published in over 400 scientific publications. He is Fellow of the Royal Society of Chemistry (UK), the International Society of Magnetic Resonance and has received the Zavoisky Award, the Bruker Prize, the Gold Medal of the International EPR Society and honorary doctorates (Dr. h.c.) of the University of Uppsala, Sweden (2008) and the Université d’Aix-Marseille, France (2014). He has been President of the International EPR Society (2005 – 2008) and is currently Vice President of the Council for the Annual Nobel Laureate Meetings in Lindau.

Wolfgang Lubitz says of his appointment:

“To provide mankind with enough clean energy in the future is one of the great challenges of our time. The articles in the  journal EES are at the forefront of research in this important scientific field”