By Hannah Porter, Publishing Assistant.
A catalyst made from soybeans could overcome a major barrier to cheap hydrogen fuel by replacing the platinum catalyst used in the electrocatalytic production of hydrogen, claim scientists in the US.
For hydrogen to be competitive with petroleum fuels, the US Department of Energy has estimated that its cost must be reduced from $4–5/kg to $2–3/kg. The platinum catalyst used to make hydrogen via water electrolysis is a significant part of the cost, so the search is on for cheaper catalysts that are just as efficient.

Now, James Muckerman, Wei-Fu Chen and colleagues at Brookhaven National Laboratory, New York, have produced a catalyst made from molybdenum – an abundant transition metal, around 1500 times cheaper than platinum – and ground soybeans. 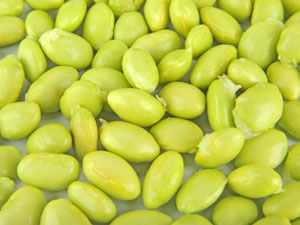 Read the article from EES: