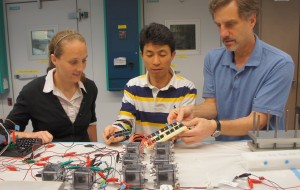 Marta Hatzell, Younggy Kim and Bruce Logan at work in the lab. Photograph by Robert Davis

Microbial fuel cells (MFCs) are a potential “green” energy source of the future, using organic matter in water to produce electricity. However, the voltages obtained from MFCs are generally too small to be useful.

Now Bruce Logan and his co-workers at Penn State University have shown that MFC voltages can be increased while maintaining continuous power production.

They introduced two sets of capacitors that are alternately charged and discharged into their circuit. The capacitors were charged in parallel by the MFCs, but linked in series while discharging thus preventing a phenomenon known as voltage reversal which can cause an overall decrease  in the voltage achieved. Impressively, the system also had negligible energy losses compared to those reported up to now.

Read the full details of this HOT EES paper: