RSC Books would like to congratulate Martin Karplus, Michael Levitt and Arieh Warshel, who have today been jointly awarded the Nobel Prize for Chemistry.   The researchers have been awarded the prestigious prize for their work in the development of multiscale computational models for complex chemical systems.

Ariel Warshel has twice written on this subject for RSC books, read more in Quantum Tunnelling in Enzyme-Catalysed Reactions and Computational and Structural Approaches to Drug Discovery. 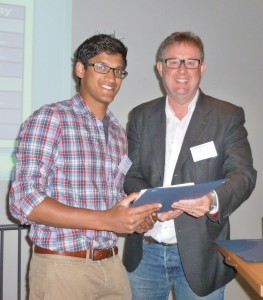 It has been a busy month for medicinal chemistry publications in the Royal Society of Chemistry Books office, with three interesting and informative new scholarly books being published.

Successful Strategies for the Discovery of Antiviral Drugs, edited by Manoj C Desai and Nicholas A Meanwell, and Comprehensive Biomarker Discovery and Validation for Clinical Application, edited by Peter Horvatovich and Rainer Bischoff, were both published in early June, followed just a week later by Dendrimers in Biomedical Applications, edited by Barbara Klajnert, Ling Peng and Valentin Cena.

The 2013 RSC Medicinal Chemistry Summer School was held at Loughborough University on the 17-21st June.  A poster session was held for the first time and expertly judged by Roger Griffin and Andy Davis, editor of the forthcoming RSC book  The Handbook of Medicinal Chemistry, to be published in 2014.  The winners won either a years’ subscription to MedChemComm or a Royal Society of Chemistry book from the RSC Drug Discovery Series.

I recently attended the European Association of Poisons Centres and Clinical Toxicologists (EAPCCT) Annual Congress in Copenhagen.  The congress saw excellent contributions on a wide range of topics from delegates travelling from across the globe.  I will also soon be attending International Conference on Bioinorganic Chemistry (ICBIC 16) to be held in Grenoble, France from the 22nd-26th July.

Finally, I would like to mention the RSC/BMOS Young Investigator Award. Awards will be allocated to four outstanding researchers (two from the UK and two from Latin American) to attend the highly awaited 15th Brazilian Meeting on Organic Synthesis (10-13 November 2013) which includes lectures from leaders in the field covering new and emerging aspects of organic synthesis. Please visit the website for more information and to apply: http://rsc.li/bmos15.  The closing date for entries is the 15th July 2013.

If you have an idea for a book or you would like to find out more about the RSC Drug Discovery, Issues in Toxicology or RSC Metallobiology Series please contact the medicinal chemistry Commissioning Editor, Cara Sutton.

Comments Off on Medicinal Chemistry: Books, conferences and prizes

The Royal Society of Chemistry publishes book titles across a wide range of areas, in the area of medicinal chemistry and drug discovery we have recently published the following title:

Smart Materials for Drug Delivery brings together the recent findings in the area and provides a critical analysis of the different materials available and how they can be applied to advanced drug delivery systems.

Other forthcoming titles include:

Cara Sutton will be attending the European Association of Poisons Centres and Clinical Toxicologists (EAPCCT) Congress in Copenhagen from the 28th to the 31st May 2013.

If you have an idea for a book or you would like to find out more about the RSC Drug Discovery, Issues in Toxicology or RSC Metallobiology Series please contact the medicinal chemistry Commissioning Editor, Cara Sutton.

Comments Off on Medicinal Chemistry and Biochemistry Book Releases

Examining the effects of veterinary pharmaceuticals in humans 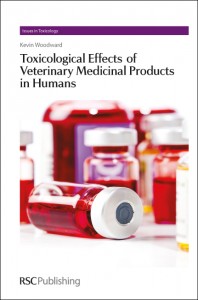 Examining adverse drug effects reported to regulatory agencies, including the FDA Center for Veterinary Medicine and the UK Veterinary Medicines Directorate, the chapters focus on occupational saftety and consumer issues, but also focus on circumstances in which exposure may occur and the background of adverse health effects from alternative sources in the veterinary and farming professions.

This professional reference text will provide an essential resource for medical practioners working in hospitals, poisons information centres, veterinarians, regulators and risk managers and those working in industry and academia.

Comments Off on Examining the effects of veterinary pharmaceuticals in humans 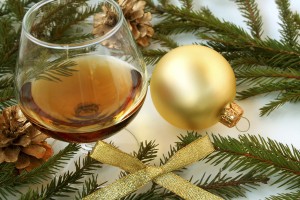 Gold has inspired and captivated mankind from long ago, and at this time of year, with Christmas rapidly approaching, the influence of this precious metal is even more apparent. From the Three Wise Men bringing precious gifts of gold, frankincense and myrrh, the five gold rings in the Twelve days of Christmas, to golden tinsel strewn around the tree – gold is very much the seasonal colour of celebration and importance.

With all this glittering gold around, we have selected Nanoporous Gold: From an Ancient Technology to a High-Tech Material to highlight as our December Book of the Month. The book is published as part of the inspirational RSC Nanoscience and Nanotechnology series and is edited by Arne Wittstock, Jurgen Biener, Jonah Erlebacher and Marcus Baumer, all of whom are experts working within the area of materials science and nanoporous gold.

“Each of the chapters is detailed and interesting, and would make very valuable reading for individuals interested in porous metal sponges of gold as well as of other elements” Reviewed in Gold Bulletin.

Beginning with an in depth introduction, firstly to gold, its history and significance, and then to nanoporous gold, this accessible book comprehensively discusses all aspects of nanoporous gold chemistry, materials science and the utilisation of this versatile substance.  Furthermore, each chapter begins with an introduction to the subject covered providing the reader with the context for the following discussion.  Offering unrivalled coverage of all areas of nanoporous gold chemistry this book will provide a thorough grounding for researchers from a wide variety of disciplines, for those working in both industry and academia.

Is all that glitters gold? Find out here.

Comments Off on Gold: A very seasonal colour 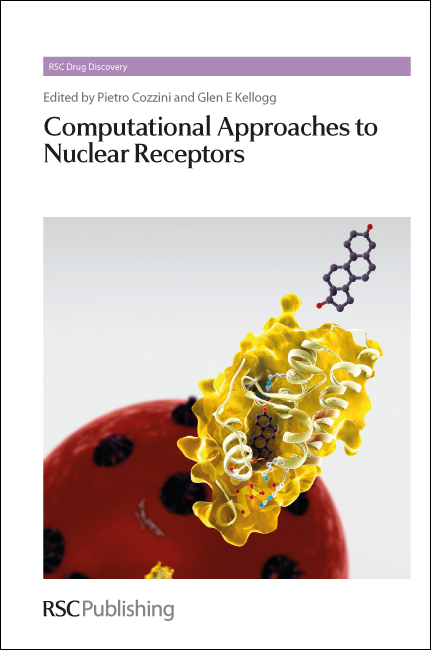 Nuclear receptors are evolutionary conserved proteins and important targets for drug and food additives.  The first nuclear receptor structures were determined by X-ray diffraction in the 90’s, since then the number of known structures has increased dramatically.  The number of structures available, combined with numerous “omics” projects, has opened up great opportunities for the discovery of new targets, the characterization of abnormal protein patterns, the selection of “tailored” drugs and the evaluation of drug efficacy, even with a lack of structural data.

Computational Approaches to Nuclear Receptors, recently published in the RSC Drug Discovery Series and edited by Pietro Cozzini and Glen E Kellogg, provides a comprehensive review of the current and on-going investigations into nuclear receptors.  With detailed discussion of all aspects of computational approaches including an introduction to the structure and function of nuclear receptors, how to use structural data as a platform for computational studies and details of utilising molecular dynamics techniques in understanding the movements of nuclear receptors in both high and low flexibility domains.

Each chapter discusses the advantages and disadvantages of each of the different methods discussed, giving the reader a comprehensive and balanced view of the current investigations surrounding nuclear receptors.

Comments Off on A fresh approach to studying nuclear receptors 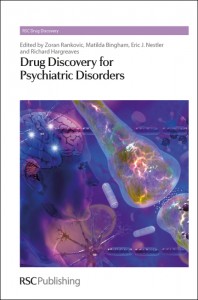 The discovery and development of drugs to treat psychiatric disorders has had a profound influence on our understanding of these disorders and their pathology. However, the medicines being used today are far from perfect, some with serious side effects and others that are only partially effective. Despite recent advances, there is still an urgent need for more effective, safe and well-tolerated treatments.

This exciting and extensive professional reference text from the RSC Drug Discovery series covers the advances, challenges and future prospects in the discovery of drugs aimed at treating major psychiatric disorders such as schizophrenia, depression, anxiety, ADHD, bipolar disorder, addiction and autism.

Drug discovery for psychiatric disorders edited by Zoran Rankovic Matilda Bingham, Eric J. Nestler and Richard Hargreaves, and written by experts from both academia and industry, will be an essential text for medicinal chemists, pharmacologists and pharmaceutical scientists specialising in the development of pharmaceuticals for psychiatric disorders.

Learn more about this fascinating and rapidly developing field here.

Comments Off on Improving psychiatric medication, tablet by tablet… 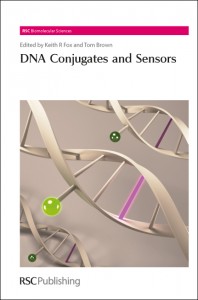 Nucleic acids have numerous biological functions and have been exploited as diagnostic tools, drug molecules, biosensors and nanostructures.  The properties and function can be further enhanced by adding conjugates such as fluorophores, small molecular and enzymes.  These attachments help to promote recognition properties, stabilise against degradation and facilitate detection.

DNA Conjugates and Sensors, recently published in the RSC Biomolecular Sciences series and edited by Keith Fox and Tom Brown describes these useful tools that have been used for disease identification and treatment and forensic applications.

Written by leaders in the field and describing the preparation, properties and applications of DNA conjugates, this book will be of interest to a wide variety of researchers, including those working in analytical chemistry, chemical biology, medicinal chemistry, molecular pharmacology, structural and molecular biology.

Comments Off on Enhancing DNA enhances the applications 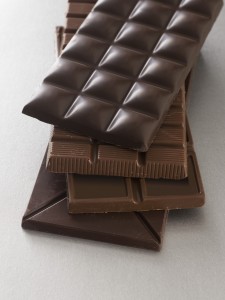 Finally the news we’ve all been hoping for, eating chocolate may actually increase your chances of winning a Nobel prize!

Research published in the New England Journal of Medicine suggests that the number of Nobel prize winners from a country directly correlates with the countries propensity towards eating chocolate.1  The research highlights the Swiss as having the highest number of Nobel laureates per capita and being the biggest chocolate eaters.

But before you dash out to grab a bar, we have further good news; a boost to your IQ is not the only benefit from a square or three of chocolate.  The recently published Chocolate as Medicine describes the history of chocolate use, uncovering many potential health benefits along the way.  The authors, Philip Wilson and W Jeffrey Hurst, both work in the famous chocolate town of Hershey, Pennsylvania, and use their expertise to provide insights and anecdotes about the use of chocolate. Packed with information and photographs, we would recommend having your favourite bar handy while reading this book, as it is certain to increase your cravings!

Satisfy your craving, pick up a copy here.

Step away from the razor – it’s Movember! 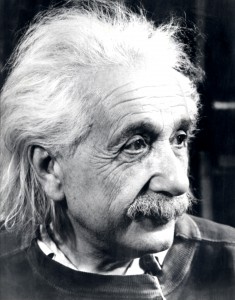 For those not in the know, this month is Movember, a month-long moustache growing charity event to raise funds and awareness of men’s health issues, in particularly prostrate and testicular cancer.  Participants are encouraged to gather sponsorship in exchange for sporting a dashing ‘tache for the month of November.

With this in mind, we have chosen to celebrate Movember by highlighting the book Hair in Toxicology.  Published in the Issues in Toxicology series, this fascinating book is entirely devoted to the in-depth investigative analysis of the hair shaft.

Covering areas such as hair growth, hair fibre formation, pigmentation and exposure, this text discusses all the toxicological issues related to hair analysis.

Want to know more about toxicology? Read more in Issues in Toxicology.

Comments Off on Step away from the razor – it’s Movember!