Archive for the ‘Book Reviews’ Category

At the tail end of last year we received this positive and perceptive review of ‘Science and art: the painted surface’ from Catherine Emma Nicholson at Chemistry World. This book was Edited by Antonio Sgamellotti, Brunetto Giovanni Brunetti and Costanza Miliani. If it inspires you to find out more about this publication, then further details can be found from our online bookshop. 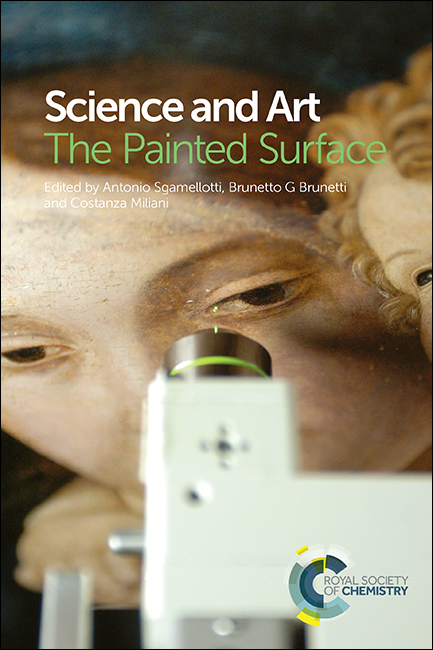 “This volume shows a global solution to a long-discussed problem: how to get scientists, art historians and conservators working together. The book presents a host of projects where collaboration has allowed all of these groups to learn from one another. Some chapters describe the science and techniques, useful for scientists wishing to work in a similar setting; others focus on the art, showing how the results of scientific studies have led to a deeper understanding of a corpus of artifacts, linking to particular cultural traditions. Unsurprisingly, given the editorial board of the book, Science and art gives the reader an overview of the diverse range of projects that Charisma (cultural heritage advanced research, a multidisciplinary conservation and restoration project) researchers have been involved with. The book shows a number of analytical techniques that are now becoming essential in conservation science. Charisma researchers, along with other scientific experts, used their expertise to reveal hidden depths in many famous works. The book discusses various techniques, focusing on non-invasive methods such as infrared reflectance, Raman spectroscopy, x-ray fluorescence and multispectral imaging as well as the more exotic synchrotron x- ray analysis. Science and art also provides an excellent read for art historians, who will instantly recognise the famous pieces that have been studied, while giving them insight into how a painting was constructed, what it is made from, or how the colours would have looked when they were freshly painted. I was struck by the editors’ choice not to only focus on European works, but to take a worldwide view, including chapters on Mayan manuscripts, Tibetan paintings and Japanese panels. This clearly shows that this blossoming research area requires even more bridges to be built, spanning research communities and forging stronger links between them.”

Comments Off on Chemistry World review-Science and Art: the Painted Surface

Affecting over 1.5 million people across the world, Parkinson’s disease is a progressive neurological condition. It affects 1.5% of the global population over 65 years of age. As life expectancy is increasing, over the next few years the number of patients with Parkinson´s disease will grow exponentially. To date, there are no available treatments that are capable of curing Parkinson´s disease, and the current goal of therapy, dopamine replacement strategies, is to reduce symptoms. Find out more about the RSC Drug Discovery Series at  http://rsc.li/drug-discoveryor email framer@rsc.org

Comments Off on Parkinson’s Disease 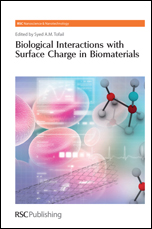 Edited by Syed A. M. Tofail

The book originates from the activity of a BioElectricSurface consortium, funded by the European Commission under the FP-7 Nanosciences, Nanotechnologies, Materials and New Production Technologies (NMP) program and discusses the crucial role surface charge plays in the interaction between materials in biological and medical applications. The first part of the book covers new findings in biology, e.g. bone growth by charged hydroxyapatite and photocatalytic effect in doped titania and includes useful explanations of the many modern techniques used to create and measure electric charges at surfaces and intersurfaces.

The first part of the book contains some very useful information, such as discussion of the polarization of hydroxyapatite, which increased bone growth on the negative surface while no growth was observed on the positive surface, and commentary on the increased photocatalytic activity of doped titania . This section also concisely, but thoroughly, analyses thermally stimulated depolarization current methods,  the laser intensity modulation method of charge measurements, scanning probe, Kelvin probe force and electrostatic force microscopy, and the streaming potential measurement techniques used for wet cases. The techniques utilized for interfacial measurements, such as confocal laser scanning microscopy, are also covered in chapter 4.

Part 2 describes many practical examples in which the surface interactions play an essential role. For example, chapter 5 discusses immobilized enzymes on porous surfaces in biocatalysts, drug delivery, and biosensors, while chapter 6 goes on to describe improvement of the extracellular matrix (ECM) by the interactions of host tissue cells with the implant surface  Chapters 7, 8 and 9  discuss antibody immobilization on solid surfaces, adhesion, proliferation and differentiation of bone-forming cells with electrostatic charge at biomaterials surfaces and interactions of biofilm-forming bacteria with abiotic surfaces. Endothelial cells and smooth muscle cells on the biomaterials surfaces, interactions of bacteria and fungi on biofilms in hospital acquired infections and immunological response of electrostatic charge at the surface of biomaterials are covered in chapters 10, 11 and 12. Such elaborate discussions show the relevance of surface charge in biological interactions at and with non-biological surfaces and, I strongly believe, will provide a solid foundation for interested readers who are willing to bring innovative ideas of surface modifications to generate or control a specific biological response on implantable therapeutic devices.

Part 3 of the book is a logical progression from parts 1 and 2, and describes some of the important applications where surface charge is believed to play a significant role. These include: Community and hospital acquired infections of methicillin-resistant staphylococcus aureus (MRSA), MRSA-resistant textiles, inhibition of encrustation in urological devices and the reduction of restenosis in cardiovascular stents.

The book finishes with a general overview of a new class of materials, named as vector materials, where the interfaces between biomaterial and biological environment can be manipulated by the application of vectorial effects induced by electrical polarization.

Surface charges are frequently experienced by the frictional electricity in textiles. The infection of bacteria and the restenosis of implanted stenosis are broadly concerned matters in the society. As a basic research, it is noteworthy that negatively charged hydroxyapatite induces new bone. The book shows that the study of electric charge in surfaces is important to understand the basic mechanism of all these matters. The many topics introduced in this book promises more rapid progress in future research.

The abbreviation of technical words sometime hinders the understanding of sentences, but the subject index at the end of the book helps greatly to solve this difficulty. The arrangement of chapters is also well ordered. The Editor’s kind efforts are appreciated.