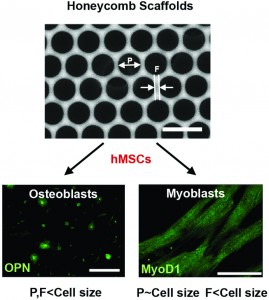 The ability for a stem cell to differentiate into a specific cell type depends on the cell’s surrounding microenvironment. Variables such as substrate stiffness, presence of certain growth factors, fluid flow, and extracellular matrix composition in the cell culture environment all play a role in the cell’s ability to differentiate. Additionally, there is great interest in studying the effects of surface topology on stem cell differentiation in vitro to more accurately mimic the in vivo microenvironment. Using various micro-fabrication technologies, 2D and 3D substrates with varying topographic features including grooves, pits, pores, and posts can be fabricated and tested with cells to evaluate cell response.

Researchers at Tohoku University in Japan have fabricated “honeycomb” topological substrates to regulate the differentiation of mesenchymal stem cells. The substrates are manufactured using a chloroform solution of polystyrene and an amphiphilic co-polymer, poly(N-dodecyl acrylamide-co-6-acrylamidehexanoic acid), or dioleoylphosphatidylethanolamine (DOPE). The solutions were cast on a glass slide and exposed to a flow of humid air to generate polystyrene films that resemble honeycomb from a beehive. The honeycomb substrates had varying pore size and strut width depending on the chloroform evaporation time.

Interestingly, when both the pore size and strut width were smaller than hMSC size, cells showed globular morphologies and increased expression of osteopotin (consistent with osteo-specific differentiation). On the other hand, when the pore size was the same size as hMSCs, the cells expressed MyoD1 and had elongated morphologies (consistent with myo-specific differentiation). Given the promising morphological and staining results, further studies are required to fully characterize the molecular mechanisms of the differentiation process.

One Response to “Honeycomb surfaces for stem cell differentiation”