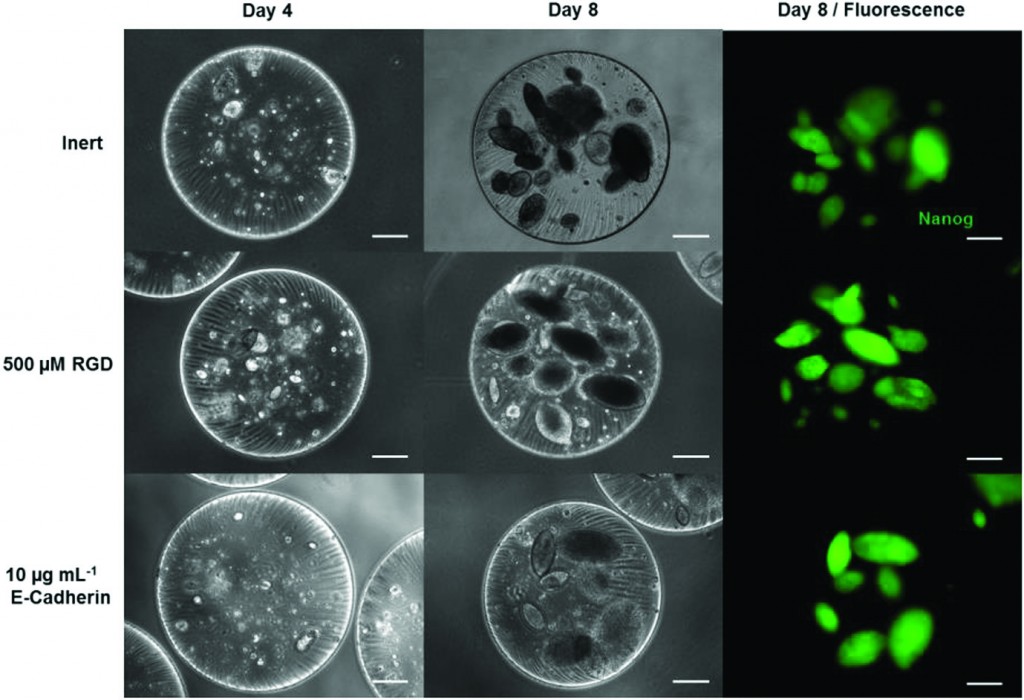 Induced pluripotent stem (iPS) cells continue to hold great promise for cell transplantation therapies for numerous debilitating diseases. For instance, a patient’s skin cells can be “re-programmed” into iPS cells and converted into heart, liver, or bone cells (to name a few). These cells can then be used to regenerate specific tissues, and would theoretically bypass the patient’s immune response since the original cells come directly from the patient.

However, the scalability and growth of iPS cell in vitro continues to be a significant challenge. To address this problem, researchers at the University of Tokyo and École Polytechnique Fédérale de Lausanne have engineered bioactive hydrogel beads to significantly increase the expansion of iPS cells in vitro while maintaining their pluripotency.

Mouse iPS cells were readily encapsulated and expanded in alginate/polyethylene glycol (PEG) gel beads using an effective three-step protocol.  First, iPS cells were added to a precursor solution of functionalized PEG and alginate. The precursor solution was loaded into a linear extrusion vessel and allowed to drip into a calcium chloride bath to crosslink the alginate and form gel beads. Second, the maleimide-functionalized 4-armed PEG in the beads was further crosslinked with di-thiolated linear PEG using a Michael addition reaction. Finally, the fully-crosslinked beads were coated with poly(L-lysine) to prevent volumetric swelling of the beads, since swelling imparts harmful mechanical stress to the encapsulated cells during the culture process.

Interestingly, the encapsulated iPS cells were pluripotent after 8 days in culture (confirmed with Nanog expression and colony morphology). To make the beads “bioactive,” the PEG networks were functionalized with cell adhesion components (RGD peptide or E-cadherin) to enhance iPS cell expansion. Overall, increasing the concentration of RGD binding sites in the bead offers up to an 80% increase in iPS cell proliferation compared to non-bioactive bead controls.

Additional experiments demonstrate that the expression of pluripotency markers and primitive endoderm markers is a function of bead design. Notably, the pluripotency marker Rex1 was significantly more expressed in beads containing RGD or E-Cadherin compared to non-bioactive beads. Furthermore, endoderm markers such as Gata4 and HNF4 were down regulated in beads containing specific concentrations of RGD. These results support the conclusion that the design of the bioactive bead has direct effects on the pluripotency of encapsulated iPS cells.

Ultimately, bioactive hydrogel beads are a promising solution for increasing iPS cell expansion in vitro, and are well suited for use in future regenerative medicine applications.