We are delighted to announce that Professor Wei Min has been selected by the Analyst Editorial Board as the winner of the 2018 Analyst Emerging Investigator Lectureship! This Lectureship was launched to be a platform for an early career analytical scientist to raise the profile of the analytical sciences to the wider scientific community and general public. 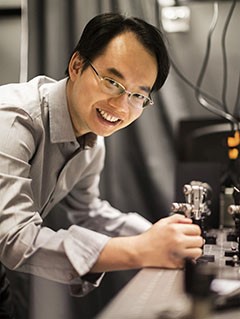 Dr Wei Min graduated from Peking University with a Bachelor’s degree in Chemistry in 2003. He received his Ph.D. from Harvard University in 2008, studying single-molecule biophysics with Professor Sunney Xie. After continuing his postdoctoral work in Professor Xie’s group, Dr Min joined the faculty of the Department of Chemistry at Columbia University in 2010. He was promoted to Full Professor there in 2017. He is also affiliated with the Kavli Institute for Brain Science and NeuroTechnology Center at Columbia University.

Dr Min’s current research interests focus on developing novel optical spectroscopy and microscopy technology to address biomedical problems. In particular, his group has made important contributions to the development of stimulated Raman scattering (SRS) microscopy and its broad application in biomedical imaging including bioorthogonal chemical imaging of small molecules and super-multiplex vibrational imaging.

The award will be presented to Dr Min at SciX 2018 in Atlanta, Georgia in October 2018, where Dr Min will be delivering his plenary lecture.

Once again, we would like to extend our warmest congratulations to Dr Min on this well-deserved award.

Applications of vibrational tags in biological imaging by Raman microscopy