Medicinal and Catalysis Chemistry in Brazil: New Directions ⇔ and Beyond

The Royal Society of Chemistry office in São Paulo recently supported and sponsored two events in Brazil that sound like opposites to each other. Similarities appeared on two fronts: difficulties in keeping science running, such as promoting events, and the role of Women in Science, both live discussions. Pirinópolis in Goias State with its historical landscape and natural beauty hosted the 9th edition of the Brazilian Medicinal Chemistry Symposium, BrazMedChem. The region is known for its falls, food and local culture, which includes “Cavalhada“.

Prof. Garneau-Tsodikova gave an emotional testimonial about balancing motherhood and research when she saw another professor in the audience with her baby in a sling. It was a sign that everything is possible and having a family is a natural part of women’s lives.

Prof. Garneau-Tsodikova’s scientific talk was “Towards understanding, engineering, and developing novel nonribosomal peptide enzymes” and she was also pleased to see local schools invited to take part of the event, with some experiments to showcase what chemistry can do and call their attention to science in general. RSC engaged with the meeting in different ways: Prof Gonçalo Bernardes officially received his Lectureship certificate from Prof. Garneau-Tsodikova, an RSC Medicinal Chemistry (formerly known as MedChemComm) Associate Editor, right before giving his talk: 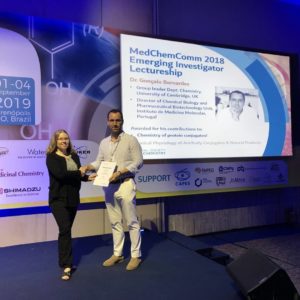 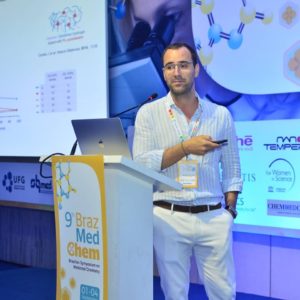 Prof. Gonçalo is part of the Advisory Board of Organic & Biomolecular Chemistry (OBC). We also co-supported an Early Career Award for Prof. Luis O Ragasini from USP-RP: 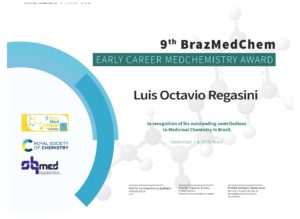 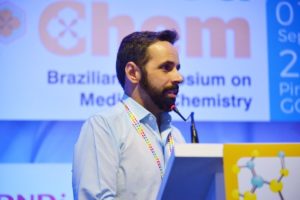 At the final ceremony, RSC offered four poster prizes (as book vouchers and electronic subscriptions) and the proud winners are shown below:

We also had the opportunity to see the interactions of many institutions and companies with the researchers, such as DNDi and the Bill & Melinda Gates Foundation, who were present to discuss the future of drugs for neglected diseases. 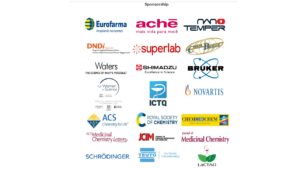 This brings me to the next event that happened almost at the same time, the 20th edition of the Brazilian Congress on Catalysis, CBCat in São Paulo. The organizers managed to engage both catalysis companies and energy ones as well. If Brazilian researchers keep up these interactions, the research landscape will change, as well as the way academia communicates with industry and the other way around. It is past time to break the barriers of innovation. During the Catalysis Congress, the main goal was to show how catalysis can be applied to different fields, from organic synthesis to fuels. Again, the discussion around CO2 used as a feedstock or as an energy building block brought together different views.

At the final ceremony and with the support of two of our Editorial Board Members, RSC was able to provide four poster prizes (as book vouchers) from the following journals: 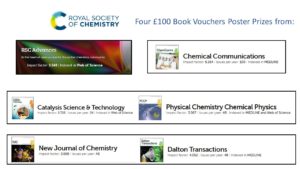 …and the proud winners are shown below: