While many people can properly guess that  the Royal Society of Chemistry originated in the UK, they may not be aware of just how far we’ve come, literally, since our British beginnings in 1841. Over 175 years later, we have offices around the world, including one in beautiful São Paulo, the most populous city in Brazil and in the Southern Hemisphere. The city has one of the most vibrant and thriving economies in Latin America, but even though the country has seen growth in the science and engineering research sector over the last decade, times are hard right now for academics in Brazil. In the spirit of internationalization, our office in Brazil has been working hard to promote the science that is being accomplished here to our colleagues around the world.

It certainly helps that we’re located next to the Science and Innovation Network in Brazil, one of the British government’s strategic partnerships in 30 countries/territories, that aim to mutually benefit both the UK and host-country. Through the RSC’s physical presence in this partner nation, we can forge strong UK-Brazil interactions that support research and innovation for the whole world. We have been working with other partners to create networking opportunities that put researchers in the global spotlight, and lubricate the group gears in the search for solutions to global problems. It is a win-win situation. You interact more, you expose yourself, you embrace big problems and that helps push to solve local (and often critically necessary) ones.

One of our long-term Brazilian partners is Sociedade Brasileira de Química (SBQ), the Brazilian Chemical Society; as a not-for-profit organization like the RSC and as a scholarly and professional society, SBQ supports the chemical sciences in Brazil and even publishes its own Journal of the Brazilian Chemical Society, which it makes freely available to read to advance science literacy. The RSC’s support of SBQ has been historical and since 2007 we have been taking part in the SBQ annual meeting.

The Brazilian Chemistry Certificate of Distinction

For 2019, the IYPT, apart from the splashing success of our IYPT lanyards, we decided to take a step forward and award the researchers who have been publishing with us in the last 2 years. As a publisher, we measure engagement by publication numbers. More importantly, we want to recognize engagement, and we hope this boosts publications further and leads to further engagement. As examples, we took part of some Newton Fund Brazil activities and also the Brazil-UK Year of Science and Innovation. We worked together with our recent partner, CNPq, Conselho Nacional de Desenvolvimento Científico e Tecnológico (CNPq) – the Brazilian National Council for Scientific and Technological Development – which is a part of the Ministry of Science and Technology under the Brazilian federal government. Joining forces with CNPq, we put the new prize together: the Brazilian Chemistry Certificate of Distinction. The idea was to recognize researchers with outstanding publication records and give back the opportunity for networking, to help make the awardees gain further recognition and encourage the new ones in the game to look for opportunities.

During the 42th Annual Meeting of the Brazilian Chemical Society in Joiville last May, we presented the prize winners. During the honor ceremony we presented the two awardees. Firstly, representing Women in Chemistry, Prof Dirce Pozebon from UFGRS, was awarded. Prof Pozebon publshed 6 Articles in 2017-2018 which collectively received 39 citations. Prof Eufrânio N. Silva Jr from UFMG, was awarded after publishing 8 Articles in 2017-2018, which received 42 citations. He was not able to attend, but Prof Luis Claudio Barbosa from UFMG (one of our FRSC) represented him during the ceremony. 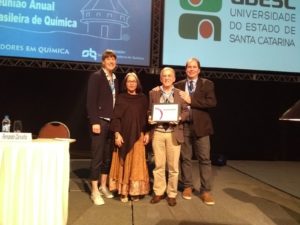 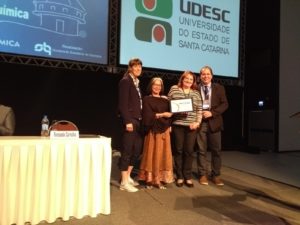 The selection guidelines for the Brazilian Chemistry Certificate of Distinction can be found here. This prize it will contribute to winners in their dual roles as the researcher and the professor, with the opportunity to travel abroad to attend an international conference and/or spend some short period interacting with fellow colleagues. The prize includes money towards accommodation and travel from both CNPq and RSC. The Certificate of Distinction shows our commitment to recognizing our interactions with our communities in Brazil. It gives concrete ideas for the future stakeholders who embrace internationalization and networking tools, in giving back to the academic society the knowledge that science, in the end, brings to our lives. A nation with no investment into the scientific community does not flourish, as no progress can be made in the right direction.The scientific production in Brazil needs to be recognized, and the quality of the work done here can make an impact – if only, with all the differences we face and discuss, it is put to the task to solve technological problems.