Supramolecular hydrogels arise from the self-assembly of low molecular weight gelators (LMWG) and a large amount of water (typically higher than 99% by mass) using non-covalent interactions.  Bolaamphiphilic molecules comprise of at least two parts including a hydrophobic skeleton such as alkyl chains, a steroid, or a porphyrin, and two hydrophilic groups on both ends which to give either symmetric or asymmetric end groups.  Such bolaamphiphiles with hydrophobic spacers can act as low molecular mass gelators.

Non-chemically crosslinked hydrogels have been extensively studied in the context of enzyme encapsulation and stabilization. However, a flexible and porous structure is required to facilitate full penetration of the enzyme into the substrate.  The immobilization of amphiphilic graphene quantum dots (GQDs) and enzymes into hydrogels remains of great interest for amplifying a signal to give high sensitivity for sensing applications and maintaining enzymatic activity in biological applications.

Recently, the groups of Boosayarat Tomapatanaget (Chulalongkorn University, Thailand) and Jonathan W. Steed (Durham University, UK) have collaborated to design novel fluorescent hybrid materials comprising graphene quantum dots and enzymes supported in L–phenylalanine derived bis(urea) supramolecular hydrogels (GQDs/Enz/Gels) for detection of organophosphates such as pesticides. Determination of organophosphates (OPs) using this hybrid material arises from the turn-on photoluminescent responses observed in the presence of the pesticide and is caused by inhibition of the enzymatic production of hydrogen peroxide, which quenches luminescence as shown in Scheme 1. 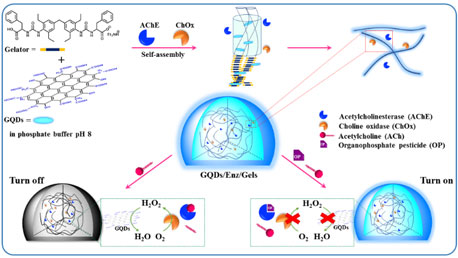 The enzyme-loaded photoluminescent sensing hybrid gel materials (GQD/Enz/Gel) were prepared in two stages (Figure 2, S1 – S2). The microstructures of materials were examined by SEM with the comparison of GQDs/Gels and GQDs/Enz/Gels with different gelation time. Moreover, the rheological properties of gels demonstrated large G¢ values by the addition of GQDs or by using phosphate buffer as the solvent. GQD/Enz/Gel materials have been investigated for their organophosphate sensing ability. Gratifyingly, the visual changes showed that the photoluminescence intensity of the GQDs/Enz/Gels depended on the concentration of organophosphate pesticide dichlorvos, which inhibited the activity of the acetylcholine esterase enzyme (AChE) in the hybrid hydrogels.  The inhibition efficiency of AChE by OPs in oxo-form of the phosphate group (methyl-paraoxon and dichlorvos) are higher than those of OPs in thio-form (malathion and parathion).  Interestingly, the naked-eye fluorescence images obtained by the GQDs/Enz/Gels with dichlorvos, under UV irradiation at 365 nm displayed a significant brightness change upon increasing the analyte concentration. 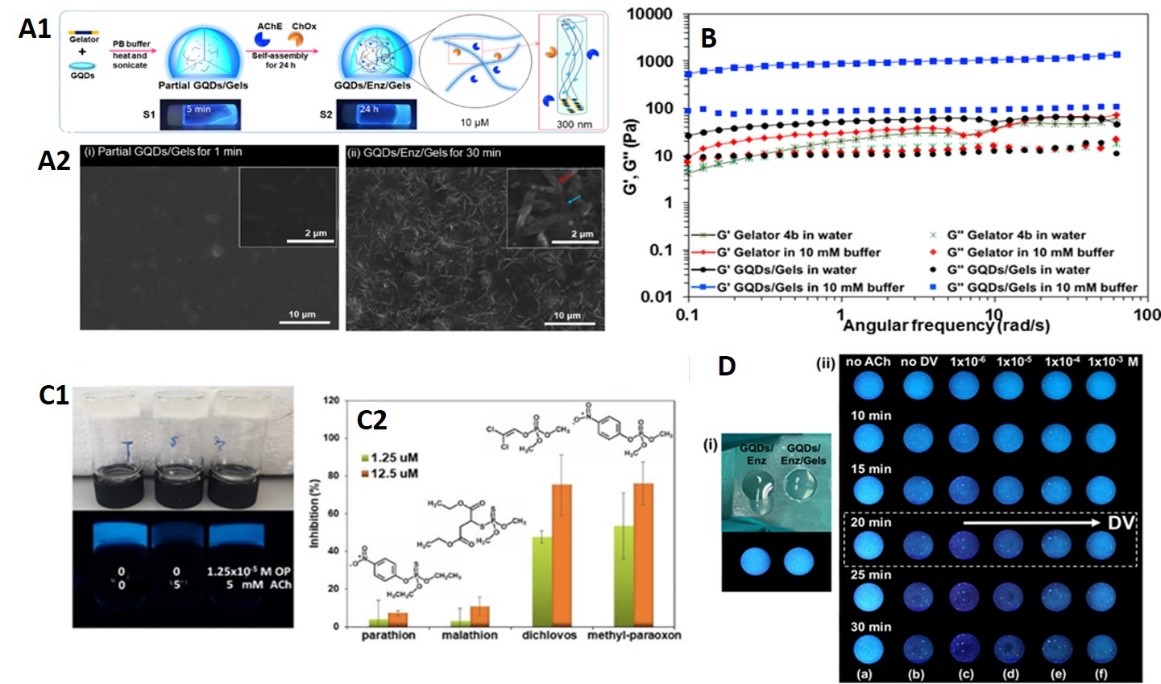 Figure 2. (A1) Preparation of partial GQDs/Gels (stage1) and GQDs/Enz/Gels hybrid hydrogels (stage2). (A2) SEM images of the dried partial gels (xerogels) from stage 1 prepared for 1 min and the hybrid hydrogels from stage 2 prepared for 30 min followed by drying under ambient conditions for 2 days. (B) frequency-sweep rheology of gelator 4b and GQDs/Gels from 4b in different conditions. (C1) visual changes of GQDs/Enz/Gels with various number of OPs and ACh. (C2) Comparison of inhibition efficiency (%) of AChE in hybrid hydrogels after incubation in 1.25 x10-6 and 12.5 x10-6 M of four organophosphate pesticides. (D) Photographs of hybrid GQDs/Enz/Gels sensory chips (Glass slide 7.6 x 2.6 cm and circle with diameter of 0.5 cm) in the presence of various concentration of dichlorvos (DV) and time of measurement.

This work also provides new insight into improving the performance of low molecular weight hybrid hydrogels through combination with GQDs, enzyme and phosphate buffer. The result is a highly effective and potentially versatile sensing system, with a high sensitivity and stability.  This is the candidate sensing system regarding to the enzymatic turn-on sensing in a small molecule gel medium. This efficient enzymatic sensing candidate offers opportunities for the development of a myriad of specific and highly sensitive hybrid nanomaterial-based (bio)sensors. 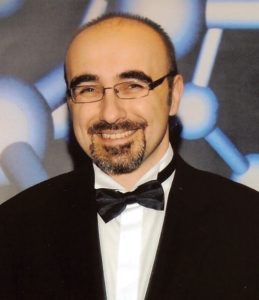 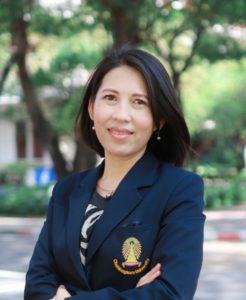 Jonathan W. Steed obtained his B.Sc. and Ph.D. degrees at University College London, working with Derek Tocher on organometallic and coordination chemistry. He graduated in 1993 winning the Ramsay Medal for his Ph.D. work. Between 1993 and 1995 he was a NATO postdoctoral fellow at the University of Alabama and University of Missouri, working with Jerry Atwood. In 1995 he was appointed as a Lecturer at King’s College London. In 2004 he joined Durham University where he is currently Professor of Inorganic Chemistry. Professor Steed is co-author of the textbooks Supramolecular Chemistry (2000, 2009 & 2021) Core Concepts in Supramolecular Chemistry and Nanochemistry (2007) and around 350 research papers. He has edited various books including the 8-volume Supramolecular Chemistry from Molecules to Nanomaterials (2012). He is the recipient of a number of awards, most recently the 2021 RSC Tilden Prize. He is Editor-in-Chief of the American Chemical Society journal Crystal Growth & Design. His interests are in crystallization, supramolecular gels and crystalline solids particularly pharmaceutical solids, co-crystals and hydrates. See personal web pages for full details.

Boosayarat Tomapatanaget is associate professor in the Department of Chemistry, Faculty of Science, Chulalongkorn University (Thailand). She received her PhD in Chemistry at the Faculty of Science, Chulalongkorn University in 2003. The research field of Professor Boosayarat Tomapatanaget encompasses many aspects of supramolecular chemistry, particularly in applications such as the design and synthesis of chemosensors. The molecular recognition of biological targets has formed a major part of host-guest chemistry including the hybrid organic/inorganic based on nanomaterials for sensing purpose.