Organometallic chemistry of the rare earth and actinide elements has been a driving force for the development of novel functional materials and catalysts for decades, giving rise to impressive advances in the fields of single-molecule magnetism, luminescence, and polymer sciences. Excitingly, organometallic approaches have always been on the forefront of fundamental chemistry and allowed breakthroughs in the field, not only with the lighter metals but also some of the heaviest actinide candidates. The inherent reactivity of organometallic compounds owing to the apparent labile and reactive metal-carbon bonds renders the isolation and characterization of such molecules exceptionally challenging, especially when aiming at polymetallic rare earth complexes, and is therefore underdeveloped to this date. Consequently, the exploration of suitable synthetic routes to access bridged organometallic metallocene complexes is of great interest for the rare earth and more general inorganic chemistry community.

Recently, the group of Selvan Demir at Michigan State University has demonstrated that two rare earth metallocene fragments are able to capture the tetradentate salophen ligand, giving rise to the first series of dinuclear salophen-bridged rare earth metallocene complexes with the metals yttrium, gadolinium and dysprosium, Figure 1. These molecules also constitute the first metallocene salophen complexes for any metal ion. Remarkably, the flexibility of the salophen bridge allows the binding pockets to face outwards upon complexation to the metal ions which is a rare, yet intriguing, coordination mode. Consequently, a substantial separation of the metal centers (7.858 – 7.895 Å) occurs leading to weak electronic or magnetic communication between the rare earths. Since the magnitude of magnetic exchange coupling between paramagnetic metal centers and/or organic radical is crucial for the generation of better-performing multinuclear single-molecule magnets,  the magnetic communication in these salophen complexes was explored.

The dynamic magnetic properties of the paramagnetic dysprosium complex revealed characteristics of single-molecule magnet behavior, while the static magnetic susceptibility data collected for the paramagnetic gadolinium complex allowed quantification of the magnetic exchange, Figure 2. The determined coupling is of similar magnitude to other polynuclear rare earth complexes containing diamagnetic bridging ligands. DFT calculations on the diamagnetic yttrium conger revealed negligible orbital overlap between the metal center and the salophen ligand in the highest occupied molecular orbital, Figure 1, which may account for the weak magnetic coupling in the paramagnetic variants.

Notably, the lowest unoccupied molecular orbital might be able to be populated with an unpaired electron. Radicals, innate to unpaired electrons, promote strong exchange coupling when placed between rare earth magnetic moments and are, thus, extremely sought-after in the fields of single-molecule magnetism and spintronics. Excitingly, cyclic voltammetry measurements of the salophen

complexes revealed a quasi-reversible feature attributed to the reduction and oxidation of the salophen bridge on the timescale of the electrochemical experiment, Figure 2. This paves the way for chemical reductions of these molecules to generate coveted metal-radical compounds in the future. Noteworthy, chemical functionalization of the salophen backbone may readily be attained which serves as an additional path to augment magnetic coupling and as such highlights the enormous potential of the salophen ligand in organometallic chemistry. 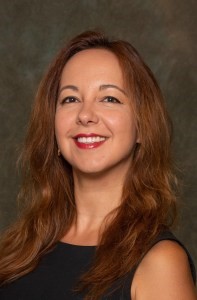 Selvan Demir is an Assistant Professor of Chemistry at Michigan State University. She earned her Dr. rer. Nat. at the University of Cologne researching on scandium solid state chemistry with Prof. Gerd Meyer and scandium organometallic chemistry with Prof. William J. Evans at the University of California, Irvine. Subsequently, she focused on lanthanide-based single-molecule magnets and porous aromatic frameworks with Prof. Jeffrey R. Long at the University of California, Berkeley, and worked on transuranics with Dr. David K. Shuh at the Lawrence Berkeley National Laboratory. Afterwards, she took up a junior professorship of inorganic chemistry at the University of Göttingen. Since 2019, she researches with her group at Michigan State University, on various areas surrounding the chemistry of the rare earth elements and actinides. The research group focuses mainly on organometallic chemistry, small molecule activation, single-molecule magnetism, and lanthanide/actinide separations. A particular emphasis is also on heavy p-block element and uranium chemistry.