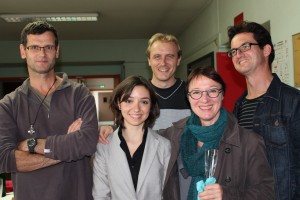 There has been an intense effort to understand how UVA radiation damages DNA, induces mutations and is involved in human skin carcinogenesis. A classic Photochemical & Photobiological Sciences Perspective by Sage and co-workers summarizes the main results of such investigations.

The article highlights unresolved issues in the field and discusses the more controversial data in the recent literature. In particular, the authors summarise the evidence that the formation of cyclobutane pyrimidine dimers, the major DNA damage induced by UVA in mammalian cells, is caused by direct DNA-absorption of UVA photons rather than photosensitized reactions. This research is of particularly great importance for considering approaches to photoprotection.

Although contradictory data on UVA mutagenesis has been reported in the literature, the authors offer a critical analysis of the key findings and conclude that the main mutations induced by UVA are C to T transitions at bipyrimidine sites – the same process as for UVB. The authors propose that such a mutational specificity is a general UV signature, regardless of whether the UV radiation in question is UVB or UVA. This raises the question of what are the causative wavelengths when such mutations are observed in skin tumours.

The review also presents new insights on the genotoxic effects of UVA and provides a better understanding of the relative contribution of UVA to skin carcinogenesis, a crucial issue considering exposure of the human population to UVA radiation is unavoidable. The review presents mechanistic arguments that complement epidemiological studies on the risk of melanoma associated with the use of tanning beds, which emit over 99% UVA, and provides a platform for raising new questions on the potential effects of UVA radiation.

Since its publication in 2012, the Perspective has attracted considerable attention from researchers in the field, as evidenced by a growing number of citations.

To find out more, read the full article, which is free to access for 4 weeks: