Researchers from Qigang Wang’s group have developed a new strategy for the fabrication of core shell magnetic microgels for glucose detection, which is one of the most frequently used tests in clinical environments. Magnetic nanoparticles containing carboxylic acid groups on the surface were used as a starting material to covalently bind the enzyme glucose oxidase (GOx). A second enzyme, horseradish peroxidase, was also attached through a bifunctional polyethylene glycol polymer which ensured a working distance between the two immobilised enzymes. The microgels could be formed by adding glucose and acetylacetone (ACAC) with PEGMA and crosslinker PEGDA. One of the by-products of glucose oxidation, hydrogen peroxide, reacts with ACAC to form radicals that polymerise the monomers resulting in a gel-like coating formed around the enzyme containing particles. 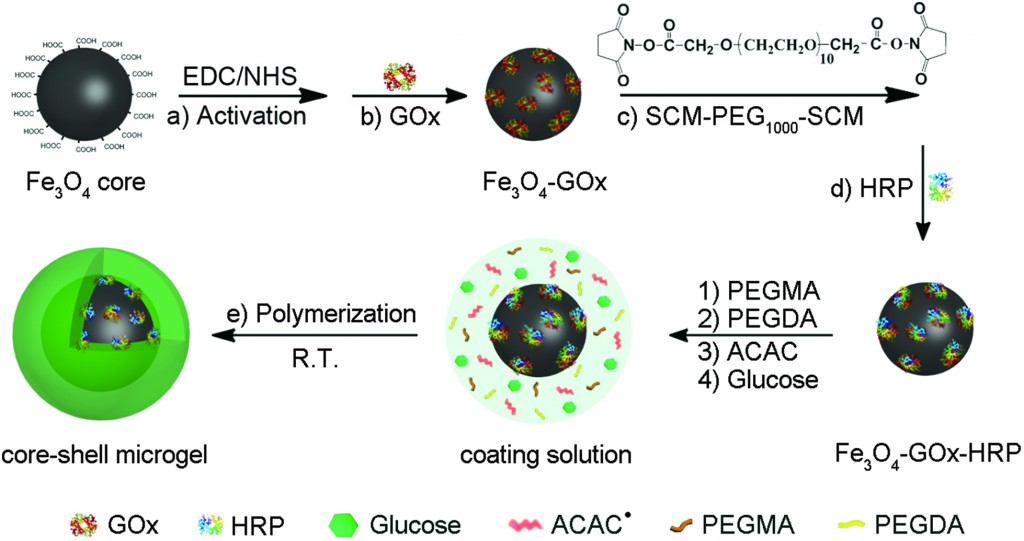 The preparation of the magnetic core–shell microgels.

After polymerisation the enzymes retained their reactivity. Even after 7 days storage, 96% catalytic activity was observed with respect to a fresh sample. The high selectivity towards glucose was demonstrated with other sugars e.g. fructose, lactose and maltose. It is thought that this strategy could be extended to the detection of other biomolecules through new oxidase-HRP systems, as well as being easily translatable to clinical fields.