Written by Susannah May 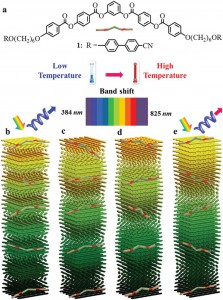 A new helical superstructure that reflects light across the whole visible system has been reported in a new HOT article. The structure can be tuned to reflect light from ultraviolet through to near infra-red, in a wide temperature range.

Liquid crystals are intriguing materials which have properties of both liquids and crystals. They have found uses in many day-to-day applications, such as flat-screen televisions, but much about them, and the many phases they can exhibit, remain unknown.

Quan Li’s group, at State Kent University, had previously designed a new achiral liquid crystal trimer with a twist-bend nematic phase. In this experiment they doped it into a chiral liquid crystal (CLC) to see what effect it would have. As expected, adding the trimer increased the CLC’s chirality, forming a helical structure. More surprisingly, it also increased the temperature range of the liquid crystal phase, proportionally with the concentration of trimer added. What’s more, the resulting superstructure reflected light across the whole visible spectrum. The specific wavelength reflected could be reversibly tuned by adjusting the temperature, meaning the structure could reflect different colours of light at different temperatures.

The group think that strong molecular interactions between the CLC molecule and rod-like units of the trimer cause the effect. In future the superstructure could be used to make colour-display thermometers, and demonstrates the potential of doped liquid crystal systems in obtaining new fascinating properties.