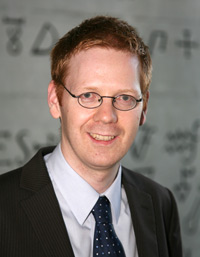 Congratulations to Professor Christian Heinis from École Polytechnique Fédérale de Lausanne, Switzerland, who is the recipient of the 2013 MedChemComm Emerging Investigator Lectureship.

Professor Heinis receives the Lectureship in recognition of his research into drugs in the “middle space” between small molecules and biologicals, in particular for his work on cyclic peptide therapeutics.He will deliver the lecture at the 2014 EFMC International Symposium on Medicinal Chemistry in Lisbon, Portugal.

The  annual MedChemComm Emerging Investigator Lectureship is given to a researcher who has made a significant contribution to medicinal chemistry research in the early part of their career. The recipient must also have published an article in MedChemComm. Nominations are received from members of the public and the recipient is chosen by a committee formed of members of the Editorial Board.

Christian Heinis studied biochemistry at the Swiss Federal Institute of Technology in Zurich (ETHZ) where he also did a PhD in the research group of Prof. Dr. Dario Neri. He was a postdoctoral fellow in the group of Prof. Dr. Kai Johnsson at the Ecole Polytechnique Fédéral de Lausanne (EPFL) and in the group of Sir Gregory Winter at the Laboratory of Molecular Biology (LMB) in Cambridge, UK. In 2008 he was appointed Assistant Professor with tenure track for Bioorganic Chemistry at EPFL and since 2009 he is holding a professorship of the Swiss National Science Foundation. The general research interest of Christian Heinis is the development of novel and innovative therapeutic strategies using chemical and biological methodologies and tools. Christian is a scientific founder of the start-up company Bicycle Therapeutics.