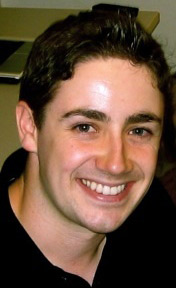 We are delighted to announce that Dr Patrick Gunning from the University of Toronto (Canada) is the recipient of the inaugural MedChemComm Emerging Investigator Lectureship.

The MedChemComm mission is to publish and promote research which pushes the boundaries of what is thought possible in medicinal chemistry, opening up new avenues of research. The committee felt Dr Gunning to be an outstanding candidate for the Lectureship, with his prominent work into the investigation and manipulation of protein function exemplifying the journal’s mission.

On receiving the Lectureship Dr Gunning said “I am absolutely delighted and honoured to be the recipient of the 2012 RSC MedChemComm Lectureship. It is a wonderful surprise!” Commenting on Dr Gunning’s Lectureship, Professor Andrew Hamilton, Vice Chancellor of Oxford University, said “Over the past several years Patrick has made an outstanding start to his independent research career. His work on disruptors of STAT3 function is both innovative and effective, and has the potential to open a new line of attack on some of the most aggressive cancers. I have also enjoyed reading his exciting and novel approach to targeting cancer through redirecting various oncoproteins from their targets to harmless anchoring into the cell membrane.”

Dr Gunning will deliver the Lecture at an international conference in the next year. This will be announced in due course.

The MedChemComm Emerging Investigator Lectureship is an annual Lectureship which is given to a researcher who has made a significant contribution to medicinal chemistry research in the early part of their career. The recipient must also have published an article in MedChemComm. Nominations are received from members of the public and the recipient is chosen by a committee formed of members of the Editorial Board. Nominations for the 2013 Lectureship will open in late 2012.

One Response to “Congratulations to Dr Patrick Gunning, recipient of the inaugural MedChemComm Emerging Investigator Lectureship”