We are delighted to announce Alexander Gundlach-Graham as the recipient of the JAAS Emerging Investigator Lectureship 2022. This Lectureship aims to recognise and support an emerging scientist working in the area of atomic spectrometry in the early stages of their independent career. 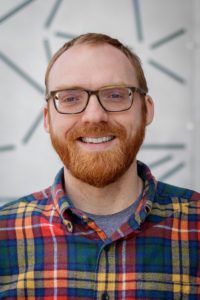 ndlach-Graham is an assistant professor of chemistry at Iowa State University (ISU). Research in the Gundlach-Graham group focuses on the development and application of single particle inductively coupled plasma time-of-flight mass spectrometry (spICP-TOFMS), as well as the investigation of novel plasma-source MS designs.

Alex received a B.A. in chemistry from Earlham College in 2008 and a Ph.D. in chemistry from Indiana University under the supervision of Prof. Gary Hieftje in 2013. Following his doctoral studies, Alex joined the group of Prof. Detlef Günther at ETH Zurich as a Marie Curie Postdoctoral Fellow. In 2018, Alex received the Ambizione award from the Swiss National Science Foundation to pursue research on spICP-TOFMS. Alex joined the faculty of ISU in August 2019.

In his career, Alex’s research has focused on atomic mass spectrometry, with significant contributions to the development of distance-of-flight mass spectrometry and quantitative elemental imaging by laser ablation ICP-TOFMS, in addition to spICP-TOFMS analysis. He has authored 37 peer-reviewed papers, one book chapter, and delivered over 20 invited lectures. Alex’s work has led to several awards, including the Ron Hites Award for best paper in the Journal of the American Society for Mass Spectrometry in 2013 and the Swiss Association for Spectrometry Award in 2018.