In memory of Akbar Montaser

We were informed of the sad news of the death of Professor Akbar Montaser. He was a prominent member of the plasma spectroscopy community and passed away recently after a long illness.

Akbar Montaser got his basic scientific education in the Pahlevi University of Shiraz, Iran in 1969, then moved to Michigan State University for a PhD in chemistry in 1974, followed by a postdoctoral stay in Ames National Laboratories and Iowa State University. He became Professor at George Washington University in Washington DC where he retired after 32 years in 2012. 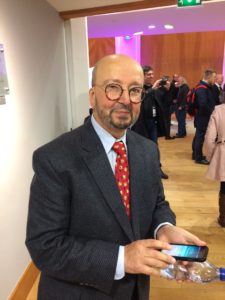 Professor Montaser made significant contributions on various methods and tools in inductively coupled plasma mass spectrometry. Some of his most important contributions in the field concern sample introduction nebulization techniques and inductively coupled plasma ionization away from the conventional argon ICP source. Many of his papers on these subjects appeared in JAAS. He will be most vividly remembered for his role as writer and editor of a seminal handbook on the methodology. This 1000+ pages bestselling comprehensive handbook appeared in 1998 and is now, considering the fast evolution of the methodology, largely outdated. It remains, however, on the bookshelf of many users as a quick and still reliable source of information.

During the years after his retirement from GWU, Professor Montaser started the task of updating his book. Unfortunately, growing health concerns delayed this undertaking and he finally died before he could end the first volume of what he intended to become a trilogy on the subject as it is today.

Anyone who corresponded with Akbar Montaser will remember that he used to end his correspondence with a quote from the famous Persian poet and Soefi philosopher Jalal ad-Din Rumi (1207-1273). The following quote of Rumi fits well with Akbar’s passing away. “Death has nothing to do with going away. The sun sets and the moon sets, but they’re not gone. Death is a coming together”. This is a quote that is open-ended in its meaning and interpretation. We see it here as an open invitation to anyone to pick up the thread of Akbar’s intention for his new book and bring it to successful completion as a worthy sequel of his Magnum Opus of 1998.

The picture shows Professor Akbar Montaser during what may have been his last meeting with his scientific peers and colleagues at the European Winter Conference on Plasma Spectrochemistry, February 2019 in Pau, France.