We are delighted to announce Sohail Mushtaq as the recipent of the 2016 JAAS Emerging Investigator Lectureship. This Lectureship was launched to recognise and support an emerging scientist working in the area of atomic spectrometry in the early stages of their independent career. 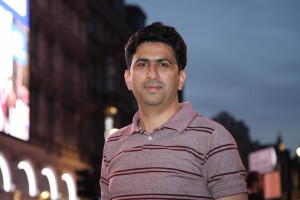 Sohail Mushtaq received his M.Sc degree in 2005 and his M.Phil in 2007, both from the Government College University Lahore (GCUL), Pakistan. During his M.Phil research project, he was awarded a scholarship by the ICSC-World Laboratory and also appointed as M.Phil Research Fellow at Salam Chair, Physics Department, GCUL. After his M.Phil degree he was selected as the Marie Curie Early Stage Researcher at Imperial College London to work with Prof. J. C. Pickering in the EC Research Training Network on Analytical Glow Discharges (GLADNET). After his PhD in 2011 at Imperial College on the effects of small amounts of molecular gases in analytical glow discharges, he took up a postdoctoral position with Prof. Edward Steers at London Metropolitan University. He has extensive experience of using the Imperial Fourier Transform spectrometer and glow discharge sources, and has carried out experimental work at EAG (Syracuse, USA), EMPA (Thun, Switzerland), BAM (Berlin) and IFW Dresden (Germany). He has made a significant impact in the field with 17 publications; including three papers with work featured on the front cover of JAAS and is internationally known for his work on molecular gases in glow discharges. He was awarded the Payling prize for the best contribution by a young scientist at the 2nd IGDSS (Internl. GDS Symposium), Prague. His main research interest is in the fundamental processes in glow discharges and their dependence on the plasma constituents.