The 2010 European Workshop on Laser Ablation was held at the Steigenberger Hotel in Kiel, Germany from 29 June – 1 July, 2010.
Each session showcased work on fundamental studies, method development and interesting applications, with plenty of time for discussion and debate.  Some of the exciting topics were: 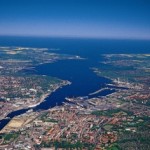 This conference was organized by the Leibniz Institute of Marine Sciences, Christian-Albrechts-University and the Kiel Cluster of Excellence.  Around 110 international delegates participated in a program comprising 28 talks and 29 poster presentations.  The latest technological advances in LA-ICP-MS were also on display by 14 exhibitors.

The Scientific Committee decided that the next European Workshop on Laser Ablation will be held in Oviedo, Spain in 2012. Until then, don’t forget you can stay informed of the latest in laser ablation by signing up to the free JAAS e-alerts.