Archive for the ‘Impact Factor’ Category

We are pleased to announce that the latest Impact Factor* for Food & Function is 2.8, according to the 2014 Journal Citation Reports ®.

We would like to thank all of our authors, referees, Editorial Board and Advisory Board for their contributions to the success of the Journal.

Click here to find out how other Royal Society of Chemistry journals performed in the latest Impact Factor release. 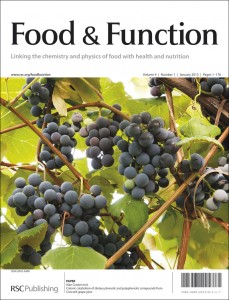 We are delighted to announce that Food & Function’s first full impact factor* is 2.7.

This fantastic achievement in Food & Function’s fourth year of publication is a reflection of the high quality of the published content and the visibility it has received in the Journal – this would not have been possible without the contribution of all our authors, referees, readers and Editorial & Advisory Board members.  Thank you, we are very grateful for your support.

Food & Function provides a unique venue to publish work at the interface of the chemistry, physics and biology of food.  We invite you to submit your latest research.

Keep up-to-date with the latest content in Food & Function by registering for our free table of contents alerts.

Read more about the 2012 Impact Factors on the RSC Publishing Blog.

For every new journal there are several important stages in its early life and development.  Initially there is the journal announcement and the appointment of an Editor-in-Chief, Associate Editors and Editorial Board members.  Then the first Advance Articles appear online followed by the publication of the first issue of the journal.

The first issue of Food & Function was published in October 2010, with two more issues in November and December completing the first volume, a total of 28 articles. The next big step was the news, in 2011, that Food & Function had been accepted for indexing in both ISI and MEDLINE raising the visibility of research published in the Journal.

The next big event in the development of a journal comes after about two years; the first impact factor.  Thomson Reuters announced the 2011 impact factors at the end of June 2012 and Food & Function received an impressive first partial impact factor of 1.179.

Additionally, unlike the calculation of a full impact factor where articles have up to 3 years to be read and cited, these articles were published at the end of 2010 so had a much shorter time to be read by researchers and referenced in future work.

With increased visibility of the articles published in Food & Function the number of citations to the Journal is growing rapidly every week, a reflection of the high quality research being published in the Journal. 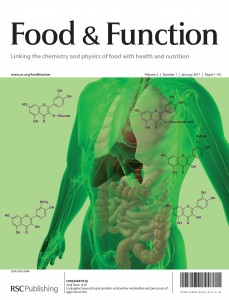 We are delighted to announce that Food & Function has been accepted for indexing in Medline making all work published widely visible and easy to discover to anyone using PubMed.

In addition, don’t forget that all content published in Food & Function is free to access (upon a simple registration) until the end of 2011.

Why not take advantage of this and submit your article today.

Food & Function is now indexed in

Comments Off on Food & Function now indexed in Medline

We are delighted to announce that Food & Function has been accepted for indexing in ISI making all work published widely visible and discoverable. Why not take advantage of this and submit your article today.

Congratulations to all the authors who have received citations so far, read these and all papers published in Food & Function for free!

Comments Off on Food & Function now indexed in ISI