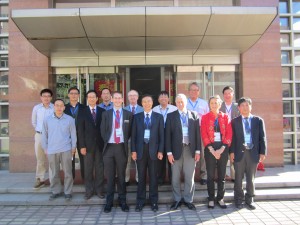 The first of three PCCP Asian Symposia took place today in Beijing. PCCP Editorial Board member Professor Lijun Wan opened the symposium.  There was a varied and exciting programme of talks, with lots of discussion, with a very international flavour.

The scientific programme at all three meetings in Beijing, Tsukuba and Seoul features world class international and local speakers including gold catalysis expert Prof Graham Hutchings, predicted by ISI on 19 September 2012 to win the 2012 Nobel Prize for Chemistry.

The next symposium will take place on Monday 1st October in Tsukuba, Japan with the final leg on Thursday 4th October in Seoul, Korea.

We hope you can join us in Japan or Korea – for more details on the locations and schedules of the meetings check out our previous post.