In recent years, several gelatin types (i.e. GelMA, A or B) have been used in pharmaceutical formulation and tissue engineering due to their excellent biocompatibility, propensity to cell differentiation and availability at low cost.1 The use of gelatin as biomaterial is also advantageous for the possibility to tune the mechanical properties of the substrate, changing the concentration in water and the degree of cross-linking. However, Transwell® is the most used permeable support with microporous membranes and is a standard method for culturing cells.2 This commercial type of support has been widely used to study the molecular secretion by different cell types and also to reproduce several in vitro physiological barriers (i.e. blood brain barrier).3 Transwell® cell culture inserts are convenient, because they are sterile and easy-to-use, but they are very expensive (~ 300 $ for a 12 pack) and possess a limited range of biomaterial properties because they are made from polyester or polycarbonate. Furthermore, as shown by Falanga and colleagues, these porous membranes are often integrated onto microfluidic chip for permeability studies.4

Recently, Yong X. Chen et al. proposed an alternative method to prepare a suspended hydrogel membrane platform for cell culture, designing a complicated protocol to synthesize the GelMA and to fabricate an open-grid structure made of polylactic acid (PLA) polymer using a commercial printer.5 Our tip shows a novel low-cost method for preparing a cross-liked gelatin membrane as a permeable support useful for potential biological applications. In addition, the proposed protocol doesn’t require the use of sophisticated fabrication technologies or expensive materials. It uses gelatin from porcine skin and the formaldehyde vapor technique to cross-link the gelatin membrane. As proof of concept, we integrate the gelatin membrane into a microfluidic chip, to show the possibility to develop a platform for comparable studies in static and dynamic conditions.

Furthermore, to demonstrate the resistance to culture temperature (around 37° C) of the prepared gelatin membrane, we tested the mechanical properties (Young’s modulus) before and after the incubation time (2 days). Finally, we observed the preservation of the mechanical properties and structural integrity that makes the membrane usable for studies with cell culture. 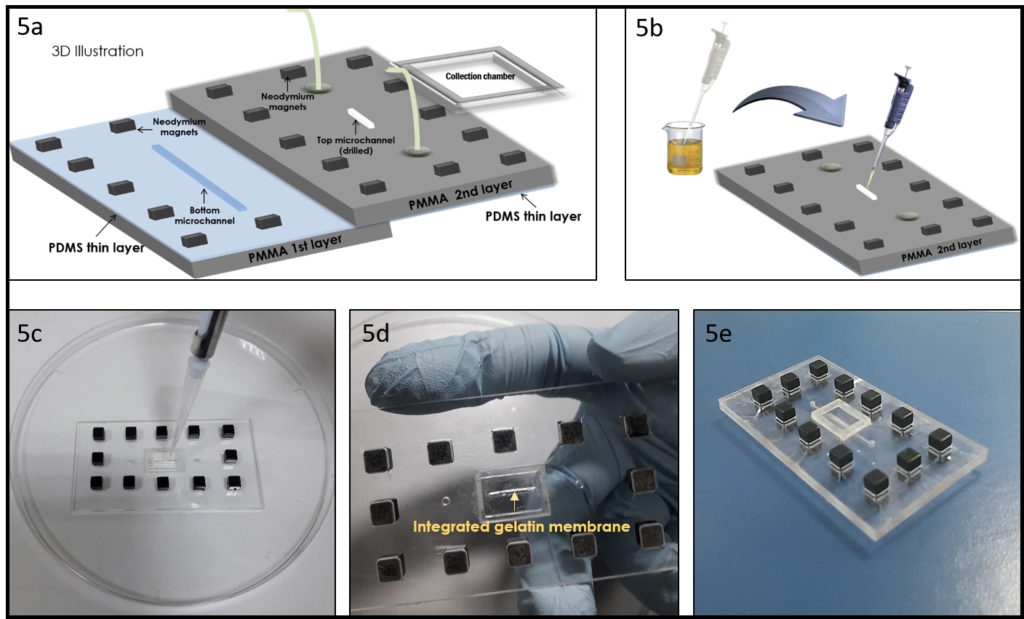 Conclusions: In this tip, a novel biocompatible gelatin permeable support was obtained by using a simple and low cost fabrication method. Vapor formaldehyde method or other chemical crosslinking approach can be applied to crosslink the integrated gelatin membrane for the use as potential scaffolds for cell culture. Furthermore, the Young’s modulus and the thickness of the permeable membrane can be adjusted by changing the initial concentration of the gelatin, the degree of cross linking and the amount of liquid gelatin. Finally, we showed the integration of the gelatin membrane into a modular microchip. Therefore, we propose an easy and low cost method to prepare a permeable gelatin membrane for cell biology and for other applications.

This work was carried out with the support of the Pierre-Gilles de Gennes Institute equipment (“Investissements d’Avenir” program, reference: ANR 10-NANO 0207).