Issue 14 for Analyst has now gone online for you to have a look at. We have some wonderful and interesting covers this time.

On the front cover we have an image from Tai Hyun Park, Seunghun Hong and colleagues from Seoul National University, Seoul, Korea. They have developed a biosensor that works on the same principles as the canine nose and have used it in the detection of hexanal, which is an indicator of the oxidation of food and food quality.

Tarkeshwar Gupta from the University of Delhi and co-workers from India and Germany have given us our inside front cover this issue. In their communication they have made an efficient sensor for ascorbic acid using a copper complex-based monolayer on glass. They hope this is a step forward in research in monolayer-based remote-sensing devices and wireless sensor fabrication.

Unlucky for some, but not for Analyst: Issue 13 is now online and features papers from the ‘Single’ issue, guest edited by Professor Henry S. White from the University of Utah. The issue features some great articles from authors such as Jonathan Cooper, Zuzanna Siwy, Lane Baker and Jonathan Sweedler.

In his Editorial, Professor White highlights the wealth of information that there is to be gained when analytical chemistry is studied at the “single entity” level.

The stunning front cover features a themed issue paper from Jonathan Cooper and colleagues from the University of Glasgow on the combination of microdroplet technology with cell-free cytoskeletal protein expression as tool for biological investigation. 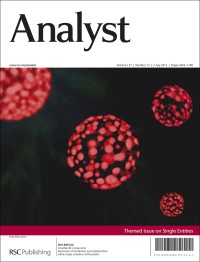 Featured on the colourful inside front cover is a themed issue paper from the group of Zuzanna Siwy of the University of California, Irvine, on single nanopores with a hydrophobic layer at the pore entrance gates, providing a way to control the transport of ions.

These cover articles will be free to access for 6 weeks.

Take a look at the other HOT papers from the themed issue:

END_OF_DOCUMENT_TOKEN_TO_BE_REPLACED 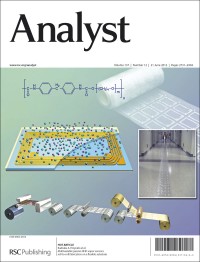 Take a look at the latest issue of Analyst.

On the inside front cover, Hans-Peter Loock and colleagues from Queen’s University, Kingston, Canada, look at online monitoring of the contamination of fuel with lubricants. They demonstrate that fiber-based Cavity-Ring-Down (CRD) absorption spectroscopy, and fluorescence Excitation–Emission Matrix (EEM) spectroscopy can provide the information that is needed to detect and quantify contamination and degradation products in machinery fluids. 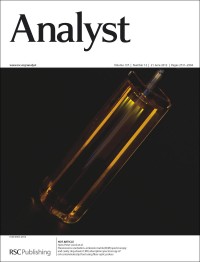 Both these cover articles will be free to access for 6 weeks. 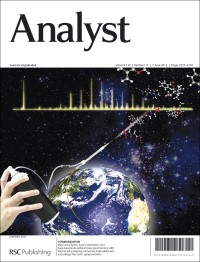 The latest issue of Analyst is now online, and we’re all about urgency as two exciting Communications feature on the covers.

On the front cover is work from Marcos Eberlin of the University of Campinas, São Paulo, Brazil and his colleagues.  They describe a simplified, fully portable version of Venturi easy ambient sonic-spray ionization (V-EASI) that now eliminates the need of laboratory gas cylinders and regulators.  This source, they say, seems to be one of the easiest to assemble and use, most economical yet effective and versatile platforms for ambient desorption/ionization mass spectrometry analysis of both solid and liquid samples.  Did you know that Marcos is an Associate Editor for our sister journal RSC Advances? Find out more here.

Some of you may think that our inside front cover looks familiar, and you’d be right…

END_OF_DOCUMENT_TOKEN_TO_BE_REPLACED 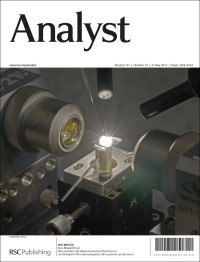 Take a look at our latest issue, now available for you to browse.

Work from Editorial Board member Professor Boris Mizaikoff of the University of Ulm is on the front cover, the inside front cover shows a striking image related to a paper on protein visualisation, and the back cover highlights a strategy for fabrication of nanoparticle-protein conjugates.

END_OF_DOCUMENT_TOKEN_TO_BE_REPLACED 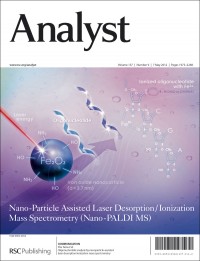 The latest issue of Analyst is now available for you to browse, and we head east for all three covers.

END_OF_DOCUMENT_TOKEN_TO_BE_REPLACED

The latest issue of Analyst is now available online and we have three exciting covers for you to admire.

The colourful front cover is from Hai Luo and colleagues from Peking University. They have studied the complexation reactions of insulin and other proteins with metal ions that are generated from the surface of substrates during laser irradiation as part of the process of laser desorption spray post-ionization mass spectrometry (LDSPI-MS).

By studying the type of sample plate material, laser and metal ions involved, they were able to make recommendations to optimise analysis to get the best possible results.

The inside front cover from Hong Chen and Lin Yuan of Soochow University and co-workers has an informative image of a new sandwich ELISA method that has been developed for cancer detection.

Their work has found that an ELISA plate in sandwich format that is modified with a gold nanoparticle layer has an amplified signal and a lower limit of detection compared to other assays. This new assay was tested on a representative biomarker in human plasma and showed superior performance.

On the back cover Gobind Das and colleagues from the Nanostructures Division of the Italian Institute of Technology have fabricated a new honey-combed nano-patterned substrate to be used in SERS biosensors.  Further work in optimisation is ongoing to produce an inexpensive and disposable biosensor device.

All three cover articles will be free to access for 6 weeks. 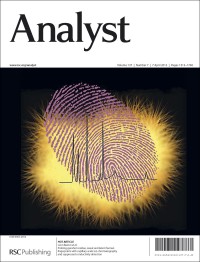 Our latest issue is now online, with three excellent cover articles for you to enjoy.

END_OF_DOCUMENT_TOKEN_TO_BE_REPLACED

The front cover of this issue highlights work by Jin Cheng and colleagues from Tsinghua University and the National Engineering Research Centre for Beijing Biochip Technology, China.  The group developed an electrical cell-substrate impedance sensing system for assessing in vitro cytotoxicity of anticancer drugs in a human kidney cell model.  This system allowed for continuous and automatic measurements with a better resolution for drugs with different toxicity profiles.

END_OF_DOCUMENT_TOKEN_TO_BE_REPLACED 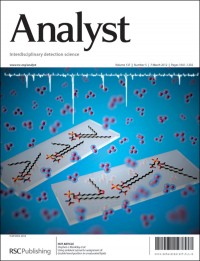 Why not take a look at the latest issue of Analyst?

Featured on the front cover is a paper on the use of ambient ozone for the assignment of double bond position in unsaturated lipids.  Stephen Blanksby and colleagues from the University of Wollongong, Australia, have made use of the fact that unsaturated lipids react with the low concentrations of ozone present in normal laboratory air.

Unsaturated lipids are deposited onto thin layer chromatography plactes and allowed to undergo ozonolysis.  The products are then analysed by desorption electrospray ionization mass spectrometry (DESI-MS), providing unambiguous assignment of double bond positions without the need for instrument modifications.

The back cover highlights research from Xiangying Sun and co-workers at Huaqiao University, Xiamen, China.  They have developmed a novel dual-fluorescence quantum dot (QD) nanocomposite with tuning emission wavelength and fluorescence intensity which can selectively sense mercury ions (Hg2+) with a detection limit of 5.6 nM.  They propose this can e used for the qualitative and semi-quantitative colorimetric analysis of Hg2+.