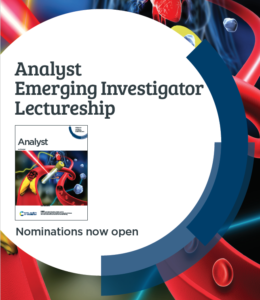 Analyst is delighted to announce the third Analyst Emerging Investigator Lectureship is open for nominations.

The Analyst Emerging Investigator Lectureship is a platform for an early career analytical scientist to raise the profile of the analytical sciences to the wider scientific community and general public.

Self-nomination is not permitted.

Nominators must send the following to the editorial team (at analyst-rsc@rsc.org) by 29th February 2020:

The nominator and independent referee should comment on the candidate’s presenting skills.

Incomplete nominations or those not adhering to the above requirements will not be considered.

For any queries, please contact the editorial team at analyst-rsc@rsc.org.