“There’s a fantastic range of things one can tackle with electrochemistry and electrochemical principles.” 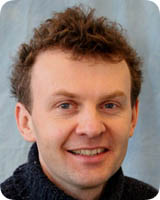 At the recent Eirelec ’11 meeting, Professor Mike Lyons of Trinity College, Dublin met with Professor Pat Unwin of the University of Warwick to speak about his life as a researcher in electrochemistry.  Read on to find out about Pat’s time as a student in Liverpool, his scientific heroes, his current work and why he uses The Beatles to inspire his students…

Mike: Prof. Patrick Unwin, it’s a great pleasure to have the opportunity to speak to you on behalf of Analyst. I would just like to ask you a couple of questions.  First Pat, could you tell us basically about yourself, your educational background and how you came to be an electrochemist?

Pat: I studied for my B.Sc. at the University of Liverpool and was generally interested in physical chemistry. I primarily went to Liverpool as I thought it was a fascinating city: very different to other English cities and almost like going abroad. As an 18 year-old , I was very interested in politics, and was a big fan of Liverpool culture, from the Beatles to playwrights like Willy Russell and Alan Bleasdale, and – of course – football and excellent pubs!

There were some inspirational people teaching at Liverpool: (now Sir) David King and Nev Richardson in surface science; Richard Compton in electrochemistry; Don Bethell in physical-organic chemistry; and David Cole-Hamilton in inorganic chemistry, among others. I did my final year project with Richard Compton and really enjoyed it. We were working on channel electrodes for mechanistic studies and I had to get to grips with extensive papers from Amatore and Savéant, and learn about hydrodynamic systems, which was a great introduction to electrochemistry as an undergraduate.

What appealed to me was just how broad electrochemistry is, and how interesting it is; how it brings together mathematics, fluids, interfaces, kinetics, thermodynamics. There’s a fantastic range of things one can tackle with electrochemistry and electrochemical principles. From there, I went to study for my D.Phil. at Oxford with Richard Compton and I moved on to work with Allen Bard in Austin, Texas as a SERC-NATO Fellow in 1990.

Mike: Ok, now I suppose I’m going to play devil’s advocate here and ask: who is your electrochemical hero, or perhaps more generally, who is your scientific hero?

Pat: My electrochemical hero has to be Allen Bard – he’s an absolutely fantastic role model as a person and as a scientist, and I learned so much by working with him. My period in Austin was very enjoyable. But, I generally take my inspirations from people and their contributions outside science. I occasionally remind my research group of how the Beatles and George Martin revolutionised music, essentially in the period of a typical Ph.D.! Their music has stood the test of time and they were so creative in developing new ideas and pushing the boundaries. And they did it while having a lot of fun along the way; all essential aspects in science.

Mike: You’ve got very broad interests in electrochemistry, can you tell us a little bit about your research and your current activities?

Pat: A lot of our effort at the moment is going into high resolution flux measurements so that we can really understand structure and function. We are developing new kinds of imaging techniques – largely (but not exclusively) based on electrochemical principles and then applying the techniques and ideas across interfacial science, so we have quite a lot going on concerning ionic crystals where we really want to understand what chemical species and phenomena are important in controlling crystal growth.

We’re also looking at membrane transport, again using basic principles of electrochemistry and diffusion. It’s exciting not least because what we learn in one area we can take into another area. Then we also have programmes looking at sensor systems, particularly developing new forms of carbon electrodes: nanotubes, graphene and diamond. That’s work I’m doing with my colleagues, Julie Macpherson and Mark Newton.

Here again, we are using high resolution electrochemical techniques to map activity. The nanoscale electrochemical imaging techniques we have recently developed allow us to identify active sites on electrode surfaces and give us considerable new insights on the behaviour of new electrode materials.

Mike: I can see where your crystal growth stuff is coming from because that comes back to your work with Richard Compton.

Pat: Yes, we studied dissolution together back in the 1980’s and that – and crystal growth investigations – goes back a long way. What we are trying to do now is apply electrochemical principles rather than techniques. There is still a huge amount to discover in this field about what the active species and processes are and what shapes a final crystal.

Mike: Yes, because soft matter synthesis is very much a black art, and people are trying to make nanoparticles of different shapes at the moment, but there seems to be very little rational basis in deciding what synthetic strategy one would actually adopt, in a particular situation so you’ve got it dead right there.

We’ll be putting up the second part of the interview soon, so watch this space!  In the meantime, do take a look at Pat’s article in Analyst from last year: